What if the unthinkable happens?...

As you plan for 2013 what are some of the things not on popular radar? Here's my list:

Housing recovers - sales, prices, construction, jobs - the whole industry bounces back sharply. It may not be as unlikely as we have been thinking. 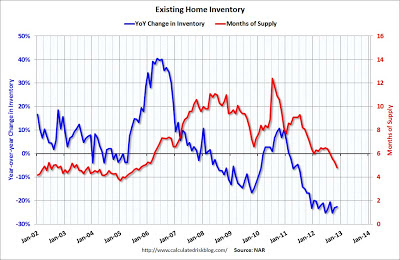 
Months of supply declined to 4.8 months in November. This is the lowest level based on months-of-supply since September 2005.
Whenever I talk with real estate agents, I ask why they think inventory is so low. A common answer is that people don't want to sell at the bottom. In a market with falling prices, sellers rush to list their homes, and inventory increases. But if sellers think prices have bottomed, then they believe they can be patient, and inventory declines. Another reason is that many homeowners

are "underwater" on their mortgage and can't sell.
Note: the Mortgage Debt Relief Act of 2007 was extended for another year. This means homeowners can sell their homes "short" (for less than they owe if the lender approves) and they don't have to pay taxes on the debt forgiveness. This will keep the short sale market active in 2013.
If prices increase enough then some of the potential sellers will come off the fence, and some of these underwater homeowners will be able to sell. It might be enough for inventory to bottom in 2013.
Right now my guess is active inventory will bottom in 2013, probably in January. At the least, the rate of year-over-year inventory decline will slow sharply.  It will be very interesting to see how much inventory comes on the market during the spring selling season! [More] 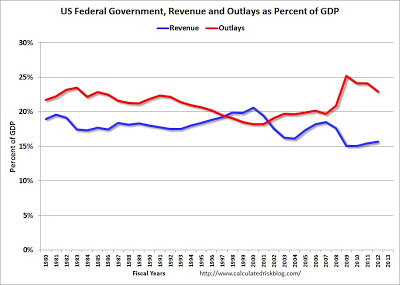 
My guess is the deficit will decline to around 5.5% of GDP this year. If there is no change in policy, I expect the deficit to continue to decline over the next few years.
However, later this decade, the deficit will probably start to increase again, mostly due to rising health care expenditures. This is the long term issue, and health care spending needs to be addressed to put the debt on a sustainable path long term.
The key points are: the cyclical deficit will slowly decline, and there is a long term issue, mostly related to health care costs that we need to start to address in the next few years.
We'd be in better shape without the structural deficit and if we had avoided the great recession (I did my best to alert policymakers in 2005).   But that is water over the dam.  The bottom line is this is all very solvable. [More]

The economy is actually stronger than we think, meaning a seemingly brutal package of budget cuts won't totally stall growth. Not saying it would be a good idea, but less catastrophic than current opinion. So if Republicans ever do take the plunge and actually specify something to cut, getting their way won't be the end of the world, IMHO.

The debt limit needing to be hiked at the end of February—now, that’s a crisis. Republicans believe that the public is currently on their side. On Friday, John Boehner showed House Republicans a poll from the Winston Group, testing their messaging and positioning on the debt limit. The pollster had asked voters whether “any increase in the nation’s debt limit must be accompanied by spending cuts and reforms of a greater amount,” basically describing the “Boehner rule” that had governed 2011’s debt talks. Seventy-two percent of voters agreed with the “rule.” Now that it was decoupled from popular policies, like higher taxes on the rich and more funding for entitlements, it was winnable.

If you dug into the poll, the results were much more ominous for Republicans. The Winston Group asked its subjects about a few programs that could theoretically be slashed. There were seven possibilities: Reducing government programs “for people like you,” cutting defense spending, means-testing Social Security, raising the Medicare retirement age, raising taxes, ending charitable tax deductions, and ending the mortgage deduction. Only one of these—means-testing Social Security—won more support (61 percent) than opposition (35 percent). The tax ideas were loathed by an overall 2-1 margin; the entitlement ideas were opposed by a narrower margin.

When you talk to House Republicans, the people with the most leverage in the coming faux crisis, they’re not sure what to do with this. They worry about the “message.” In the “fiscal cliff” talks, they felt like they were made to look unreasonable. Whenever they propose a specific entitlement cut, they’re pilloried. This was one reason why the Republican leaders’ Dec. 3 response to “cliff” negotiations, a three-page open letter, suggested “more than $900 billion in mandatory spending [cuts]” without specifying what might be cut. [More]


We could avoid default and enact an array of significant cuts and tax reform. OK - now you're just LOL, but should this occur many are totally unprepared. Agriculture would be a super-mucho-prime target for such cuts, especially now budget hawks smell blood from a wounded quarry.


With the new Congress opening Thursday, they'll have to start the farm bill process over again, most likely with even less money for agriculture programs this year and the recognition that farm interests have lost some of the political clout they once held.
"I think there's a lot of hurt feelings, that all of this time and energy was put into it and you've got nothing to show for it," said Roger Johnson, president of the National Farmers Union.
Senate Agriculture Committee Chairwoman Debbie Stabenow, D-Mich., said it even more bluntly on the Senate floor just after she learned that the bare-bones extension would be part of the fiscal cliff deal.
"There is no way to explain this," she said angrily as the deal came together New Year's Eve. "None. There is absolutely no way to explain this other than agriculture is just not a priority." [More]

An even worse corn crop. I don't think this, but NOBODY is talking about even the remote chance of a yield below last year.

China puts it into overdrive. Already the giant players seems to have sidestepped its slowdown, and if their middle class keeps growing demand, those hysterically optimistic economic forecasts of just a few years ago will be dusted off and recycled. Early signs are popping up.


Steel stocks have enjoyed quite a Santa Claus rally, thanks to a country that doesn't even celebrate Christmas. China is the world's biggest steel consumer, and recently improving industrial production, home sales, and electricity-generation there have swiftly lifted local stocks 16% in the past month -- and propelled global steel stocks to an 18% gain. [More]


The pattern is obvious here: I think we may be hampered by undue pessimism about economic possibilities.  Much of this comes from apocalyptic debt rhetoric (28.7 gazillion dollars for every man, woman and dog in America!!!). Some may come from intuitive uneasiness with economic immobility - too few ladders that hard work and diligence will allow you to scale to better lifestyles.

But most of it, I think is the age-old fear of being seen as foolishly ignorant of the dangers facing us.
Luckily being foolish is now part of my senior-citizen job description.