In my preparations for visiting South Africa, I cannot but compare the sad outcome in Zimbabwe (formerly Rhodesia) that must haunt farmers in SA. 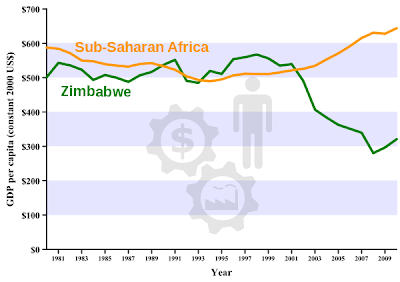 Before 2000 land-owning farmers had large tracts of land and utilized economies of scale to raise capital, borrow money when necessary, and purchase modern mechanized farm equipment to increase productivity on their land. As the primary beneficiaries of the land reform were members of the Government and their families, despite the fact that most had no experience in running a farm, the drop in total farm output has been tremendous and has even produced starvation and famine, according to aid agencies.[26] Mostly crops for export have suffered severely, e.g. Zimbabwe was the world's 6th largest producers of Tobacco in 2001.[27] It produces nowadays less than 1/3 of the amount produced in 2000,[28] the lowest amount in 50 years.[29] Zimbabwe was once so rich in agricultural produce that it was dubbed the "bread basket" of Southern Africa, while it is now struggling to feed its own population. About 45 percent of the population is considered malnourished.

Although controversial and having generated a lot of bad press, the land reform has produced some of the effects it was intended for, according to a 10-year survey of 400 households located in Masvingo province. The survey was conducted by Ian Soones of the University of Sussex, UK. Rough official figures state that about 7.6 m hectares or about 20% Zimbabwe's area redistributed since 2000. Crops for export such as tobacco, coffee and tea have suffered the most under the land reform, with e.g. a reduction in tobacco production by 43% from 2000 to 2009. The main every-day food for Zimbabweans, maize, has been reduced by 31%, while small grains production has grown by 163%.[11]
For Masvingo province Scoones finds that 28% of the total area was transferred. This was taken over by over 32,500 households on A1 sites (making up 1.2 m hectares) and about 1200 households in A2 areas (making up over 370,000 ha), alongside perhaps a further 8,500 households in informal resettlement sites, as yet unrecognised by the government. Almost half of the 400 households surveyed were describing themselves as not successful with their new land, while others have succeeded with hard work. About 5% of the households (but "possibly" more than 5% of the land) in this study has gone to "cell-phone farmers" well connected to ZANU-PF. Masvingo is however a part of the country with relatively poor farming land, and it is possible more farms went to "cell-phone farmers" in other parts of the country, according to the study [More]

While I am working to educate myself on the basics of recent history in eastern Africa, I find it is almost fractal in its complexity. One thing seems certain: South Africa is at a crucial point in its national history and certainly its agriculture. I do not know enough to reasonably estimate the future or even accurately judge how well it operates currently.

Meanwhile events unfold in Zimbabwe that will have impact on the SA outcome.


Latest annual corn production is estimated at 833,000 tons, down by 60,000 tons from last year, compared to more than 2 million tons harvested in 2000.
The collapse of the rural economy is causing mass migration to already stressed towns and cities, he said.
Farm dam walls have not been maintained, fencing has been uprooted and conservation laws are being openly disregarded with drastic environmental consequences, Taffs told reporters.
Taffs said his organization has drawn up a broad recovery program to restore the value of land against which loans could be obtained by the new farmers and former owners would provide support and advice drawn from long years of experience in farming.
“People are starving in this country. It is time to act. We can’t wait any longer,” Taffs said.
The farmers’ proposals call for foreign funding for an issue of bonds to pay compensation to farmers who lost their land and the creation of a Land Bank where the bonds, redeemable later, and title deeds would be deposited and made available as capital for new farmers to restart derelict properties and “reenergize the land market.”

If that happened and farming got back on its feet on a commercial basis, the ex-owners would have a viable investment in bonds with returns comparable to any good investment worldwide, Taffs said.
“It won’t cost the government anything. It will be a minimum burden to donors. The benefits will be immediate and immense. If it’s in place before the planting season, we could be self-sufficient in food again within a year,” he said.
The organization says less than 400 of its 4,500 white farmer members in 2000 are still on the land, half of them are actively farming and just 10 are still farming on the commercial scale they were in 2000.
“Our sector has been really been taken down. The new farmers have access to the land but no access to assistance,” he said.
Taffs said the farmers did not envisage getting their land back. Some had died penniless since the often violent land seizures began in what President Robert Mugabe insisted was a program to reform imbalances in colonial-era ownership of prime land by whites, mostly the descendants of British and South African settlers.

“We don’t want to turn the clock back. We want to go forward in a pragmatic manner. What is lost has to be monetized and put back into the economy to ensure a bright future for the people through the successful completion of the land reform program,” he said.
Experts from 50 nations, many from Africa, and officials of international financial institutions helped draw up the recovery plan unveiled Thursday.
After years of meltdown since the collapse of the agriculture-based economy, Mugabe’s party says there’s no cash to pay out displaced white farmers. In the past, it acknowledged the need compensate former owners for buildings and improvements on the land. Many of the best former white farms were given to Mugabe loyalists and cronies and now lie idle.
Compensation in new bonds, calculated from criteria still to be ironed out, would be subject to routine fiscal and investment laws to avoid capital flight, according to the farmers’ group. [More]

There is a tendency for Americans, I think, and US farmers in particular (when they bother to consider SA) to draw parallels with our agricultural history. I am not sure this is helpful for one big reason.

When Europeans came to North America, the isolation of the indigenous people made them fatally susceptible to European diseases such as smallpox. The result was a rapid and thorough extermination of native Americans such that the land was for all intents and purposes uninhabited. In Africa, by comparison, proximity had already allowed some immunity to European plagues. Indeed, it was almost the reverse case, as African diseases like yellow fever and malaria decimated colonists. The fact that economic development progressed with a tiny minority of colonists among a large and growing population of natives makes the two continental experiences hard for me to equate.