In a gaffe that could become ethanol's "bitter" echo, the normally reasonable Sen. Charles Grassley - from the state with more at stake with hog exports than many - blamed the Chinese for choosing protein and thus raising the price of food.

"If part of our problem is that the Chinese are going to eat meat and you've got to have corn and soybeans to feed the Chinese their meat, then why isn't it just as legitimate for the Chinese to go back and eat rice as it is for us to change our policy on corn to ethanol?" Grassley asked in a conference call with reporters. [More]

One could point out one small incongruity with his comparison. Our government mandated ethanol consumption, Chinese consumers shelled out hard-earned yuan for better diets. Oddly, when you have eaten mostly rice all your life, you don't have to lobby Congress to decide if you'd like something a little more nutrient-dense in the rice bowl.

Stranger still is the slow campaign in Iowa to phase out their livestock industry all the while they lament it's passing and wring their hands over what's to be done. 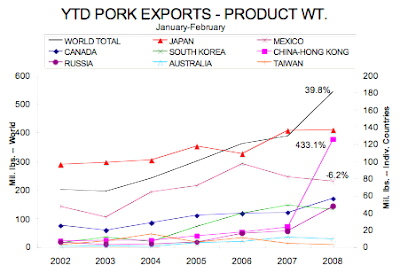 ..tell me again why we can't find a way to share some calories with paying customers? The livestock industries have belatedly decided to stand up and at least offer some resistance, and they have some numbers on their side.

Last week, a study funded by American beef, pork and chicken producers estimated that the total cost to taxpayers of the corn ethanol mandates now exceeds $33 billion per year. That's equal to about $106 per American citizen. While the soaring cost of the ethanol are maddening, even more galling are the continuing claims by a group of ethanol apologists who insist that the ethanol industry is having no effect on food prices. Those spurious claims are being made at the same time that the World Bank is warning of a global food crisis and unrest is increasing in several countries due to soaring food prices. [More]

The comment doesn't read well taken from context, I know, but hey - welcome to 2008 political discourse, Senator. And the awkward attempt to conflate improved diets for some of the world's poorest with the politically inflated incomes of US corn farmers is lamentable, and hardly reflects the Senator I thought I knew.

As the level of the food-fuel debate descends and the positions harden, cooler heads should decide just who we think we are. Do we "feed the world" (his words) or take care of No. 1?

Like I have said before, we'd better come up with some corn this fall.

And at the rate our farm is going, somebody is going to have to pick up my slack.
Posted by John Phipps at 5:22 AM

I don't know about taking up any of the slack, but..if half of what I got in the ground comes up we,(family and friends), won't need to get it elsewhere.
The economic and political going's on have sure put us,(America), in the news lately. Everyday we hear how "this administration" is not taking care of America. Usually by some disgruntled member of the opposing political party. The one thing I do know is, they are in D.C. just like the President so they are just as much a part of the administration as he. Quit griping and do something or let someone in who can. Sorry for the rant.
Maybe my dad is right when he said the rest of the world is trying to bankrupt America?? If not it sure looks that way.

Could you please expand on your comment regarding the phase out of Iowa livestock. Seemed to me to lack detail when taken in conjunction with the link to the Iowa livestock report.

The figures surprised me as well. My idea comes from the unusually active (for my part of the world) anti-CAFO groups in Iowa. The stepped up effort of FB and similar groups to promote IA animal agriculture also strikes me as an indication folks are concerned about the future.

I have heard from friends about large dairies and hog operations being refused siting permission. And the explosion of ethanol plants to raise corn prices will not make IA the most attractive place to expand livestock, I think.

Your point is valid - no details here - just conjecture from anecdotes. What I have learned is when the trends are crystal clear it's really hard to reverse them.