[Not In My Back Ocean] The big push growing behind wind energy is still hampered by people who don't mind the idea as long as it's not around them. My bet is the acclimation to wind turbines is fairly rapid - they are immobile and don't mess up traffic, and they don't change other than rotation speed, which doesn't call they eye to them after a while.

Still, the idea of getting "free" energy from unseen turbines has Europe and others looking at marine installations. Obvious problem there, of course. But what if we could just tow turbines out to sea, instead of building them from the seabed up? 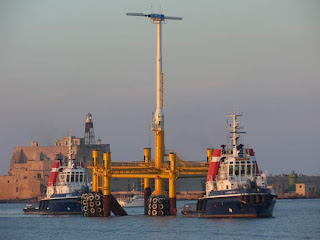 Offshore wind-farm developers would love to build in deep water more than 32 kilometers from shore, where stronger and steadier winds prevail and complaints about marred scenery are less likely. But building foundations to support wind turbines in water deeper than 20 meters is prohibitively expensive. Now, technology developers are stepping up work in floating turbines to make such farms feasible.

Several companies are on their way to demonstrating systems by borrowing heavily from oil and gas offshore platform technology. In December, the Dutch floating-turbine developer Blue H Technologies launched a test platform off Italy's southern coast; last month, the company announced its plans to install an additional test turbine off the coast of Massachusetts, and possibly begin constructing a full wind farm off the Italian coast, next year. Close behind is SWAY, based in Bergen, Norway, which raised $29 million last fall and plans to field a prototype of its floating wind turbine in 2010. [More]

I have been watching the startlingly rapid construction of a wind farm near Kentland, IN, and this week about half of them are rotating. It is way cool.

Too bad it is such a tiny source of energy - less than 0.25% of our consumption.