I'm building a submarine out of used cultivator sweeps*...

I hope we're all becoming aware of the urgent need for more nautical recycling. For example, what to do with used chopsticks? 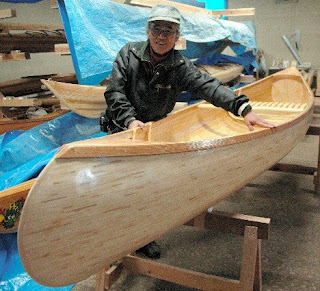 A former city employee in the Fukushima prefecture town of Koriyama has built a 4-meter (13-ft) long canoe from thousands of used disposable chopsticks recovered from the city hall cafeteria. Bothered that perfectly good wood was going to waste after a single use, Shuhei Ogawara — whose job at city hall involved working with the local forestry industry — spent the last two years of his career collecting used chopsticks from the cafeteria. An experienced canoe builder, Ogawara spent over 3 months gluing 7,382 chopsticks together into strips to form the canoe shell, to which he added a polyester resin coat. The canoe weighs about 30 kilograms (66 lbs), which is a bit heavier than an ordinary cedar canoe, but Ogawara is confident it will float. A launching ceremony is planned for May at nearby Lake Inawashiro. [More]

So far the only problems are that about an hour after a canoe ride, you get hungry.

*Theme of the Week

[via Andrew Sullivan]
Posted by John Phipps at 11:00 AM

I would like to possibly see a two seater plane made of paper?!?!
On another note..here's an invention which defies most all reason and practicality, you have got to see this!!!
go to:
www.flat-d.com/
and Please see the video..I'm still laughing...