I am becoming more convinced we are captivated by the NYSE since the video and price ticks provide a steady "scoreboard" experience for anxious viewers.  But unfortunately, this isn't our biggest threat, I think.  It remains the credit markets - largely misunderstood by most people until their employer can't make payroll of finance inventory.

One sign to watch today is what happens to hedge funds.  Admittedly, most of us (including me) have only a vague understanding of what the heck these things do, but their demise will ripple through our rich financial sector with enormous loss of wealth and employment.


Could it be that all these fund managers were simply paid far too much money over the past few years? After all, they can't all find well-remunerated work elsewhere. But for many of them, that probably doesn't matter: they can live quite comfortably off what they've earned already, and if they feel like making more they can just start investing their own funds, without having to worry about office politics or the trader sitting next to them blowing up the entire firm. [More]

Today (1 October) could be a protent, as fund owners usually can only redeem shares for a few days at the beginning of a quarter. Loss of credit protection will greatly slow the risk-taking in our economy: start-ups, buyouts, mergers, etc.  This may or may not be a really bad thing, but we have grown used to normal growth rates of 4-5% in GDP.  That won't happen without sophisticated financial instruments.

The other key indicator is the LIBOR-spread. This gauge tells you how freely money is being lent between big institutions. Right now it's pointing to "not at all".


And while creditors started putting on the squeeze last summer, it has intensified in the last two weeks, culminating in the record set yesterday by a little-known but vastly influential interest rate known as LIBOR, for London Interbank Offered Rate.

LIBOR, the rate that big banks charge one another for overnight loans, climbed 4.31 percentage points to an all-time high of 6.88 percent. Other lenders use LIBOR to determine what to charge for a wide range of loans, including home mortgages and business loans.

The spike in LIBOR followed several weeks in which rates on short-term Treasury securities, a haven for lenders seeking safety, have fallen to levels as low as they were in 1940, when the Great Depression and World War II shook the markets, Davis said. Translation: Credit markets are so concerned about safety that they'll accept almost no interest on their money for the ability to sleep at night.

So if you're looking for a number to watch to determine whether the economy is in dire straits, go ahead and watch the Dow Jones industrial average.

But check out LIBOR and rates on T-bills, too, because what they are saying right now is that unless the United States stabilizes its banks, through a bailout or some other means, businesses and consumers are going to find loans hard to come by.

Short-term credit is a lifeline for many businesses, especially retailers who use it to finance inventories for the all-important holiday season. If credit continues to tighten, businesses may not be able to make payrolls, leading to layoffs. Consumers used to tapping credit cards and home-equity lines of credit in emergencies may find their credit limits lowered.

On the bright side, the country has not reached that stage yet. But credit-market experts fear it is not far off. [More] 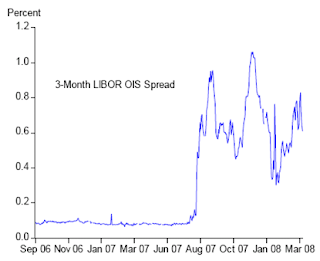 The lack of an easy way to both explain and display this financial action could mean we won't understand the consequences until the effects have changed our lives. For grain farmers, whose margins have virtually disappeared for 2009 at current prices, just when we're assembling a budget for next year, the timing couldn't be worse.

We could be facing some lender meetings with a distinctly different tone than just a few months ago.
Posted by John Phipps at 6:21 AM

YUP with unavailable loans grain farmers will have go on a "cash" economy. Spend our own money to plant and fertilize the crop. If we don't have it then don't plant!

So what's going to happen to long term (10-15 yr fixed) rates on ag land thats 60% equity? Maybe that's where our operating capital will come from.

John, you seem to be convinced that credit is about to become unavailable. I do business with several different banks. Each of my bankers assures me that they are happy to continue to extend me credit at the same rates they have been. That they see no liquidity problems and that they feel very solid. The bankers and I believe inflation is a very real possibility. One banker predicts we will see interest rates jump Decemberish. So what do you think? Are my bankers lying to me? Are they ignorant?

I'll post a detailed reply to your questions tomorrow.