Just in time for Christmas, this vision of the future by Robert Paterson after a weekend of conferring with colleagues:

I do not discount the possibility of the outcomes described above, but too many of them are forced to line up in one direction: decentralized societies rather than nations as the necessary - and not coincidentally, desired - answer.  I have suspected for a while that cultural critic would use the financial crisis as justification for a return to more local forms of social organization, to "de-integrate"  ("distintegrate" didn't sound right) away from monstrous institutions and especially globalization. 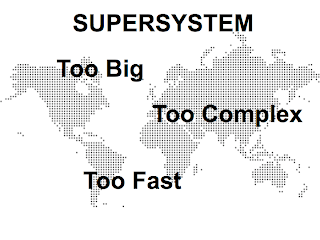 This could occur in the short run. It looks like an attractive and safe answer.  But we'll soon discover that without a sophisticated network of systems which evolved because they provided huge benefits outweighing their costs, much of the charm of retrenched civilization fades rapidly.  I note the Amish make use of MRI's for example, giving rise to a small industry of folks who shuttle non-driving Amish to hospitals.  The point is the astonishing benefits we have developed by slowly providing more linkages between people around the world will be sharply missed once the Great Fallback begins.

Like locavores who are faced with mostly grim root vegetables in February and March, the knowledge that New Zeland apples used to be down at the grocery cannot be unlearned. Even should we choose to retrace our steps economically and culturally, the same huge payoffs will be dangling there for those who re-offer a chance to markedly improve standards of living with just modest investment in technology or integration.

Farmers will be under pressure to embrace agrarian production to fit with this decentralized mythos. A growing sector will serve these communities, but I seriously doubt whether the world can begin to de-urbanize and un-link enough to markedly change our sytems of economics and basic living.

More likely is the emergence of stronger and more independent members of national or international systems.  By pushing more decisions and innovation to lower levels, institutions and even governments could better counter the inherent instability of massive entities capable of massive failures such as we have seen. In short, I think we will see new ways to aggregate and achieve economies of scale without stripping smaller components of risk or reward.

We may be about to franchise our culture.

Here's a bit of good news for us farmers (about half way down the page):

...as in countries producing energy, mineral and food commodities...

Trouble is we depend on much of the rest for our well being.

I tried that url...and got this warning from zonealarm... High Risk Website Warning!
What happened?

ZoneAlarm has found that http://tinyurl.com/667nrq&useraction=continue may be unsafe.
This website has been known to distribute spyware.

So maybe discretion is a good idea...Bill