It is a sad day for those of us in the Land of Lincoln.  Even though the past decade has lowered our expectations of public officials to ground zero, our Current Future Convict just dug a new basement.


On the issue of the U.S. Senate selection, federal prosecutors alleged Blagojevich sought appointment as Secretary of Health and Human Services in the new Obama administration, or a lucrative job with a union in exchange for appointing a union-preferred candidate.

Blagojevich and Harris conspired to demand the firing of Chicago Tribune editorial board members responsible for editorials critical of Blagojevich in exchange for state help with the sale of Wrigley Field, the Chicago Cubs baseball stadium owned by Tribune Co.
Blagojevich and Harris, along with others, obtained and sought to gain financial benefits for the governor, members of his family and his campaign fund in exchange for appointments to state boards and commissions, state jobs and state contracts.
"The breadth of corruption laid out in these charges is staggering," U.S. Attorney Patrick Fitzgerald said in a statement.
"They allege that Blagojevich put a 'for sale' sign on the naming of a United States senator; involved himself personally in pay-to-play schemes with the urgency of a salesman meeting his annual sales target; and corruptly used his office in an effort to trample editorial voices of criticism." [More]

The most chilling words in that news release are "Patrick Fitzgerald".  This prosecutor gets his man.  Every time.

Meanwhile, we are hurtling toward public sector bankruptcy thanks to a legislature which matches the character of the executive branch, our flagship newspaper is mortally wounded by thunderingly incompetent dealmaking, and our one-sided political rule is about to be overtaken by its own sheer stupidity.

Here's what really hurts.  Who is the one IL Governor I have had a chance to be pictured with? 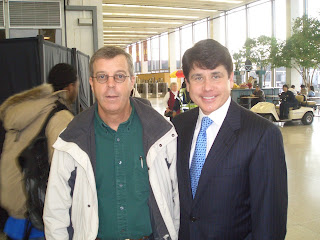 John, you really should be careful who you pal around with! ha

This isn't a sad day, it is a happy one. The sad days have been every one since he was elected and began to hold anyone owed state money hostage. And you are correct that the legislature has been as awful as Blago's behavior.

John,dandy governor you have there in Illinois. Maybe Mitch Daniels could moonlight for you guys for a few years. Probably the best solution would be to trade the counties in IN bordering Lake Michigan for ALL of Downstate IL, then build a wall.

as for the look on my face, let's just say you have to keep an eye on his hands at all times.

How sad. The worst of it is I think is that he was caught. How many others are out there.

One of the BEST Political movies ever made- "Jerry McGuire", with Tom Cruise and Cuba Gooding Jr.
Seems like all the politicians, lobbyist and lackeys can say is...
"SHOW Me THE MONEY!!!"

This incident is exhibit A for why I don't trust Democrat politicians to make competent free market decisions. Reports indicate the Governor was offering to sell a US Senate seat for only $200,000! Its got to be worth way more than that. If you sell something make some attempt to determine its value first. A simple NPV calculation of future payoffs to the senate appointee would be a place to start. If you don't like the math, post it on eBay for maximum exposure and real world price discovery. Good grief, no wonder we get beat up so badly in the WTO, our politicians don't know how to negotiate.

P.S. John, the look on your face in the photo is truly priceless.

John, I was born, raised and educated in the State of IL, leaving the state in the late 1960's. I workded summers for a road construction company. I left the state convinced that not one inch of road work in IL was done without a a "kickback" that went all the way to Springfield. The recent comment by Harry Reid regarding the "smell' of the citizens visiting the capitol should enrage everyone. It clearly demonstrates how too many of our elected officials feel about the people. The real stinch emanates from those occupying those purportely hallowed halls, to the detriment of our country. The sad thing is, we get what we are willing to put up with. I can only hope that the governor of IL has done the county a back handed favor by enlightening and enraging all citizens to demand honesty and integrity from those we elect, along with a free and unbiased press that will "vet" each candidate as opposed to helping them hide from the public for whatever reason. Maybe one litmus test should be to discover if they have a "purchase price" for doing their governmental duties. Didn't Speaker Hastert have some questionable, pocket lining, land deal on his way back to IL? John, did you check your pockets after that picture was taken?