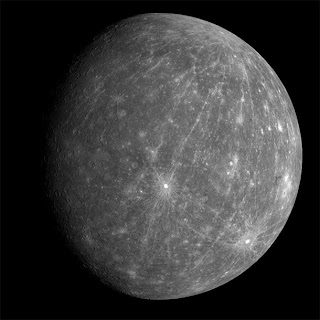 Mercury.  A planet about which we know little captured by Messenger.


Enter MESSENGER. This new spacecraft has to swing by the tiny planet three times before it can settle into an orbit, but in the two passes it’s done so far it’s already transformed out knowledge of Mercury. There were so many images to choose from; I considered this detailed overview showing tons of features, or this incredibly feature-laden crater rim segment, or this oblique view of a triply-concentric-crater, or these phenomenal rays blasting out of a young impact feature, or this beautiful view of sunset at a double crater where you can see the mountain shadows on the crater floor.

But in the end, it was the overview of Mercury showing the rays from impact craters blanketing the entire planet that made me sit back in wonder. It was taken as MESSENGER departed the planet for the second time, when it was nearly 28,000 km out. There is something about a large-scale yet detailed image that is truly pleasing to the eye; there is beauty and science together here (and in my mind, the two are nearly indistinguishable). [More]

To my dismay, near-President Obama doesn't appear all that space-happy.  Maybe it will force more cost-effective mission plans.

I recently came across your blog and have been reading along. I thought I would leave my first comment. I don't know what to say except that I have enjoyed reading. Nice blog. I will keep visiting this blog very often.