No, not estate taxes, but something even more important: trust. Although I was powerfully persuaded by Putnam's description of how we build social capital, there is some new research on the topic of where trust comes from that seems to indicate our task of rebuilding trust in many of our economic institutions will be harder than we thought.

Our trust habits are perhaps less cultural and more heritable than previously thought.


Trust has been declining in the United States as economic inequality has been rising–and
also as immigrants from historically disadvantaged (and lower trusting) groups make up a larger  share of the population.  If we worry about the decline in trust, we might pay less heed to the  waning of league bowling and dinner parties–and more to understanding why people from some cultures are less trusting than others.  And this is likely to lead back to economic inequality in the home country (Uslaner, 2002, ch. 8) and discrimination in the new homeland.
Overall, there is evidence for both culture and context.  Where you live shapes your level
of trust.  But the evidence is far stronger that where your grandparents came from shapes your  values.  Who you are seems to matter more than who your neighbors are. [More]


I'm struggling with the implications this has for our culture and economy.  It strikes me as fairly pessimistic and bordering on genetic determinism, even though I seem to come from fairly trusting stock. 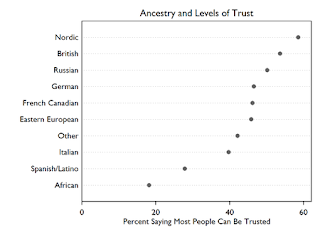 [More]
Part of my uneasiness may arise from approaching turmoil science is about to hand us via cheap genetic (DNA) testing. As new linkages between medical outcomes and genetics are discovered, ideas that social characteristics such as trust align with ancestry may pressure new importance on lineage, and all the dark history associated (fairly or not) with it.

Right now mendacious political activists and sensationalistic journalists could misrepresent and misinterpret genetic risk information. However, it is unlikely that such genetic risk information would be more toxic than claims that Obama is a secret Muslim. More and more Americans will learn about how to interpret genetic risks as genetic screening becomes routine and even more widely available in the next four to five years, making it less likely that such information can be abused. In any case, politicians, celebrities, and the rest of us should get ready for a world in which our DNA can be screened by anybody at anytime. [More of a superb, but disturbing article on DNA testing today]

The moral would seem to be: pick your parents well.  But it also makes me wonder what happens to these tendencies as Old World heritages become diluted.  How many generations before people like me are simply Americans, and what will our trust heritage be?
This may be an accurate analysis of social capital formation today, but my guess it it will fade very rapidly as populations intermarry and especially move about so much more than even our near past.
Posted by John Phipps at 4:18 PM

I skimmed the study without without resolving my skepticism. Russian-Americans are more trusting than German-Americans?? More specifically, David Hackett Fischer wrote a book called "Albion's Seed", outlining the differences among the British who were early settlers of the U.S., and arguing those differences persisted. Certainly his Scotch-Irish group (half my ancestry) were not then very trusting. Think of the Hatfields and McCoys. Yet the Quakers were also British and very trusting. So I think his results are statistical artifacts of the data he has available, without representing anything particularly real.

Do I detect certain biases built in to your reading? I had the same response, especially about the Russian-Americans.

I'm not prepared to completely dismiss his findings. He seemed to control for the many of the influences you mention.

I think the reason this caught my eye was this same reaction. We really want the answer to tell us we're not the problem.