How cool is this? 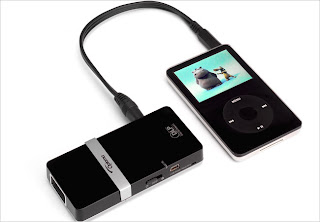 You’d have to be a jaded gizmophile indeed not to be impressed the first time you turn on this tiny, shiny black box. In the center of the short end, there’s a very bright light-emitting-diode lamp. Inside, there’s a miniaturized Texas Instruments digital-light-processing (D.L.P.) chip, similar in principle to the ones that drive some full-size HDTV sets. Together, they produce an astonishingly bright, clear, vivid video or still image. That’s right -- from a projector you’ve pulled from your jeans pocket.
There are no footnotes for that jeans-pocket statement, either (like, “not including enormous power brick”), because the Pico can run on battery power. Each charge lasts for about 90 minutes -- longer if you use the lower brightness setting or when you’re playing video without sound. You can recharge the projector either from its power cord or from a computer’s USB jack. A spare battery comes with the projector, and so does a little drawstring carrying bag.

A pocket-size, self-contained projector changes all the rules. An iPod and a Pico -- that’s the entire setup. Now, for the first time, a tent wall can become a movie screen when you’re out camping. (So much for roughing it.) [More]

The neat part about technology like this is even the makers may not fully appreciate how it will be used. Smaller, lighter, cheaper can trigger all kinds of imagination when placed  in  the hands of users.

One unfortunate outcome could be ubiquitous PowerPoint presentations for groups of 1-2 on topics so trivial as to need no more than two bullets.  Conversation may never be the same.

[Another review]
Posted by John Phipps at 10:01 AM