A really big, noisy one.  This has not been a good week masculinity-wise on my farm.  While you may think it was the emasculating crop report on Monday (from which we have surprisingly bounced up), it actually began the night before.

Jan and I had been watching Tess of the D'Urbervilles by Thomas Hardy.  Since I had crawled my way through Return of the Native in high school, I should have suspected something.  But no such luck.

We had invested 90 minutes the week before and the actor playing Tess was (ahem) able to hold my attention, I must admit. 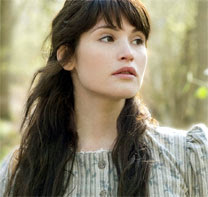 And I was confident I could exist my way through the last half with moderate attention and consciousness.

Little did I know that old Tom had the most wretchedly depressing ending waiting for me. The more self-sacrificing and noble the devastatingly gorgeous heroine behaved, the worse the men in her life treated her. I can't spoil the ending because it could not get any rottener.

Women are right - we are scum.  I have despised my gender for days, too despondent to enjoy even deeply fried foods.

Amazingly, the Brits can't seem to get enough of Victorian living, and its class-worshiping society.  Consider the hot new show on BBC: Victorian Farm.


Described as an "historical observational documentary", Victorian Farm follows a team of people who effectively step back in time to the turn of the last century. Filmed during the course of a year, they use only materials and resources that were available in Victorian times - to tend to livestock, repair buildings, prepare food and make furniture and food.

Acton Scott Historic Working Farm itself is recognised as one of the premier farming heritage attractions in the UK. Caught in a time warp, and deep within the Shropshire Hills, it retains all the atmosphere of daily life on a late Victorian upland farm. [More]

Good luck with that one, chums.

But just when the shroud of self-loathing was lifting (along with corn prices I might add), another blow to my manliness destroys the feeble momentum of my rehabilitation: it seems I am to attend a baby shower.

My own son - the fruit of my loins - has permitted, even encouraged this spectacle to take place. Don't get me wrong.  I am ecstatic he and Kristi are springing off, so to speak, and can't wait to welcome a new whatever (they haven't peeked at the sex, unlike practically all expectant couples), but I had just assumed all the goofy pregame festivities would occur at a safe distance from me.

But it has come to pass in our depraved times that instead of women going to showers and...well, doing whatever you do at one, the practice now includes couples. Even couples of advanced years.  My sixty-year spotless record of shower avoidance (not the hygienic kind, of course) is down the drain, along with whatever drops of testosterone Hardy left me.

Don't look back, comrades, it would only deepen my humiliation.  March on without me, and remember better days.

Even my wife only attends baby showers out of a sense of duty, so it is not just "a guy thing". And she also detests those games attendees are expected to join in!

Oh! No! Say it aint so Mr. John!!
Immediately drop the remote,(or wrestle it from Mz Jan, if you can),go to your workshop. Grab a
2"x4"x2'. Start making shavings out of it until the estrogen levels drop to a safe level.
Could there be a link between rising estrogen levels and inclement weather??
Do these sweatpants make me look fat??....now where is the that shed key??

Remember the single most important thing- CAKE!!! Offer to help serve, because you get mucho brownie points and you can control your serving size!!!

When my WIfe and I were engaged friends through a couples shower, she got the practical gifts, I got beer from each of the guys, worked out fine for me! Suggest that to Aaron, beer for the men and life at a shower is better!

Your now going to believe this, John, but my brother-in-law threw me a "tool shower" after I got engaged. It would have felt more manly if the word "shower" wasn't used and and everything was wrapped in duct tape. Oh, and there were NO games, it was as close to my feminine side I wanted to get.

My experience last weekend was also less emotionally scarring than I feared.

I'm still ticked at Hardy though.

John, why are you ticked at Hardy? I smell a good story.