They aren't making any more...

But they are finding more farmland.  In a striking example of a nation with a clear national policy and plenty of hard-pressed citizens to put it into practice, China is slowly working to secure food by acting like the BTO for the world.


China's Ministry of Commerce triumphantly announced this month that its bilateral trade with the continent is set to hit $100bn (£67.8bn) by the end of 2008, two years ahead of schedule. Africa's plentiful oilfields and rich mineral deposits are top of China's imports, and in return the world's most populous nation is exporting tens of thousands of its countrymen.
By some estimates, 750,000 Chinese people have spent time on the continent or have moved to Africa permanently to do business and take advantage of the natural resources. And Hebei, the province from where the middle-aged Mr Liu hails, is no exception. He reckons 10,000 farmers from Hebei alone have gone to 18 African countries in the past few years.
They work in "Baoding villages", named after the dusty township where Mr Liu lives; he likes to point out that Baoding means "Protection and peace". The villages, ranging in size from 400 to 2,000 Chinese, have been set up across the continent, from Nigeria to Kenya, from Sudan to Zambia.
Mr Liu started the Baoding villages when he was head of Hebei province's foreign trade bureau in 1998 and was seeking ways to boost the local economy, which had been dampened by the Asian financial crisis. He discovered Africa.
"We found Africa was not affected by the crisis, and we went there, and found that local people were short of food, even though there was lots of land not in use for farming and plenty of animals," he says. "So I decided to switch from exporting goods to exporting agricultural expertise."

It is a winning formula for China, which has more than 20 per cent of the world's population but only 7 per cent of its arable land. "China has too many people and too little land," Mr Liu ponts out. "In Africa, they have plenty of land and too few farmers. Places such as Ivory Coast are short of 400,000 tonnes of food a year, and the local people cannot farm enough to feed the population. Local farming skills are not developed." [More]

While this certainly looks like a mashup of colonialism and outright invasion, as long as Africans welcome the immigrants, who is to say they are imperialists?  It certainly offers a stark comparison with our military-based nation building.  And China is hardly alone in this strategic effort.

From a long term perspective, our ignorance of Africa prevents much understanding of the possibilities for farming there, given the right people in charge.

For instance we have little appreciation for how enormous the continent is. 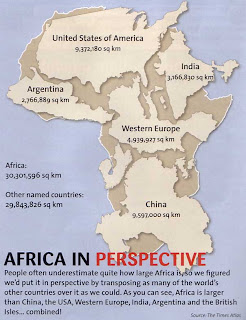 I remember joking about Brazil would never realize its agricultural potential only to have to eat those words a few years later. We may be ignoring the same or even larger competitive emergence when the energy of Chinese farmers is coupled with underutilized resources.

The Italian garment industry certainly found this out when they began importing cheap Chinese labor. To their consternation, the workers rapidly became managers and then owners.


But most brands aren't so straightforward. To please customers looking for the "Made in Italy" label, several luxury companies now have their goods made in Italy by illegal Chinese laborers. The Tuscan town of Prato, just outside Florence and long the center for leather-goods production for brands like Gucci and Prada, today has the second-largest population of Chinese in Europe, after Paris. More than half of the 4,200 factories in Prato are owned by Chinese entrepreneurs, some of whom pay their Chinese workers as little as two euros an hour. [More]

Undoubtedly this global recession will change attitudes about immigration. Already our inflows of Hispanis workers have slowed dramatically, and perhaps even reversed.  We may yet look back on the good old days of immigration problems becuase they were clear evidence of a growing economy.

The power of China is people, something generally not recognized in the west, where we see population as a problem. One reason I tend toward occasional optimism about the global economy is we now have several  hundred million more minds engaged in finding answers, instead of the few in the developed world.
Posted by John Phipps at 5:14 AM