One more reason why the media are their own worst enemy. 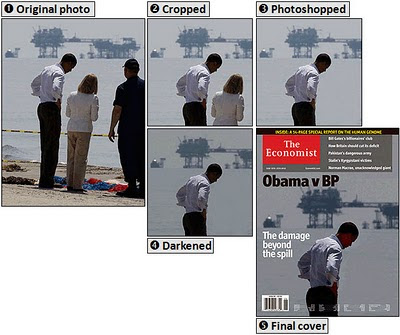 Kevin Drum calls them out.


An Economist editor responds with some examples of obvious image alteration they've used in the past, but then falls down trying to explain why they did some pretty nonobvious alteration this time around:


I asked for Ms. Randolph [the woman next to Obama] to be removed because I wanted readers to focus on Mr. Obama, not because I wanted to make him look isolated. That wasn’t the point of the story. “The damage beyond the spill” referred to on the cover, and examined in the cover leader, was the damage not to Mr. Obama, but to business in America.


The Economist has a history of using photos more as illustrations than as objects of straight news, but this still crosses a line that a news magazine shouldn't cross. Hell, I wouldn't do something like this on my blog, let alone on the cover of the Economist. But decide for yourself. The full transformation is illustrated below — and yes, I used Photoshop to create it. [More]

It would interesting to ask ag magazine/web editors about their photoshopping rules.

After all its free. Well kind of.

Before truth became relative in our society, Pavlovian training rewarded the statement that data equals truth. Today truth apparently equals what ever the spin doctor does with the data.