I was going to put this in the next Junkbox, but my reaction to it grew.  So FWIW: the earliest surviving painted portraits. 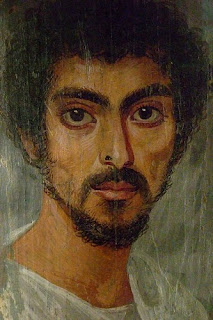 It is the remarkable realism, almost photographic, that separates these portraits from Egyptian wall paintings or even Medieval art.


The portraits were attached to burial mummies at the face, from which almost all have now been detached. They usually depict a single person, showing the head, or head and upper chest, viewed frontally. The background is always monochrome, sometimes with decorative elements. In terms of artistic tradition, the images clearly derive more from Graeco-Roman traditions than Egyptian ones. The population of the Faiyum area was greatly enhanced by a wave of Greek immigrants during the Ptolemaic period, initially by veteran soldiers who settled in the area.
Two groups of portraits can be distinguished by technique: one of encaustic (wax) paintings, the other in tempera. The former are usually of higher quality.
About 900 mummy portraits are known at present. The majority were found in the necropoleis of Faiyum. Due to the hot dry Egyptian climate, the paintings are frequently very well preserved, often retaining their brilliant colours seemingly unfaded by time. [More]

These were folks like us.
Posted by John Phipps at 6:58 PM