I have looked into long-term mortgages to restructure debt and improve our farm transition and our retirement.  While looking at some historically low offers on interest rates, believe it or not, I think they could go even lower.  At the very worst, I don't think there is a huge rush in order not to miss rates touching bottom and bouncing up. To buttress my case:

First, this bit of research from the Fed.


A recent study by the Federal Reserve (The Depth of Negative Equity and Mortgage Default Decisions by Bhutta, Dokko and Shan) investigated the question: at what point do underwater homeowners “strategically default” on their mortgages? Surprisingly, it found that the average borrower doesn’t walk away from his home until negative equity reaches a very high level, -62%. But the fascinating thing was that there was something that could trigger underwater borrowers to default much, much earlier – and that something was an interest rate rise.
With a quarter of US mortgages underwater, and likely to stay that way for some time, the Fed must follow its own research if it wants to prevent a cascade of defaults. Hence, expect US interest rates to stay ultra low for an ultra long time. [More]

Second, the strong likelihood that stimulus measures are over, and austerity is the political flavor of the month.  This will seriously slow or stop the economic recovery right in its tracks, I believe.

From Alec Phillips at Goldman Sachs (no link):


Congress looks increasingly unlikely to extend ay more fiscal aid to state governments, despite ongoing shortfalls in state revenues, and they have already let several other items lapse. We are therefore removing from our estimates an assumption of further fiscal stimulus beyond the policies in law (including this week’s unemployment extension), though we continue to expect extension of most of the expiring 2001/2003 tax cuts. This adds almost a full percentage point to the drag on growth from Q4 2010 to Q4 2011 to what we had already estimated.

This seems likely to me with unemployment stagnant and demand dismal.
Third, there are more calls for Fed action in the face of fiscal anticipated pro-cyclical action to stimulate demand and get credit flowing.  And Bernanke is keeping them in mind.


Bernanke outlined the further actions he had in mind: cutting the interest rate paid on bank reserves, strengthening the Fed's promise to keep short-term interest rates low for the foreseeable future, or buying enough mortgage securities to replace those that are paid off. If the economy appeared at serious risk of returning to recession, the Fed would consider large-scale purchases of Treasury bonds or mortgage-related securities. [More] 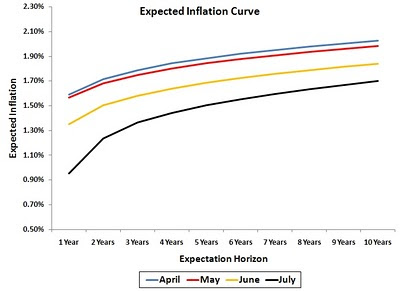 As always, I am not advocating mimicking my actions, just letting you know how I see it. Place your own bets. I have been hearing from inflation hawks (with reasonable arguments) for nearly two years warning of skyrocketing interest rates only to watch them tumble to an effective less-than-zero for most savers (rolled over a CD lately?)

All the trends in our recent economy have taken longer to reverse than we expected from history or theory.  I'm not sure why, but from the stock market to house prices, it seems even when unsustainable trends emerge, they wear out the patience of those who just know they can't continue.
Posted by John Phipps at 7:57 AM

The wild card may be in the Fed’s ability to control long term rates. Greenspan was puzzled by the response or lack of response, as it was, of long term rates with the Fed’s action prior to the housing crises. That lack of response now appears to of been wrapped up in the worldwide involvement in the house of card known as derivatives. Things known and/or more than likely things unknown could result in the Fed’s future inability to control long term rates. China’s decoupling with the dollar, stronger Europe and Asia economies and debt strapped US is the start of a recipe of something bad. This pot appears to require some time to brew if it “cooks” at all.