There has to be an ag application for drones rolling around somebody's head. 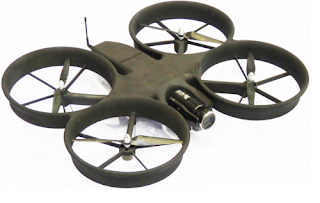 But the real prize may be in civilian applications. "The military stuff is kind of passe," Ms. Cummings said. "It doesn't take a rocket scientist from MIT to tell you if we can do it for a soldier in the field, we can do it for anybody." As a parent of a 3-year-old, she said, she could use the same technology to track her daughter on her way to school (she would need to plant an electronic bug in her lunch box or backpack). That would "bring a whole new meaning to a hover parent," she said. Schools could even use drones for perimeter control.
Indeed, many nonmilitary uses of drones provide obvious benefits—from surveying wildlife to tracking the security of oil pipelines. Other potential commercial applications include unmanned cargo flights.
But human nature being what it is, it won't take long for the technology to be embraced for less noble ends. Could nosey neighbors use a drone to monitor who isn't picking up after their dogs? "That's possible," said Henry Crumpton, a former top CIA counterterrorism official who is now chairman of a company that develops drones—including one that can take off vertically, fly through a window and hover silently over your breakfast table.
"The only thing you're bounded by is your imagination—and the FAA in the United States," he said. [More]

I had variable luck with model planes as a youth, but I'll bet these suckers get cheap and user-friendly pretty fast. You'd think livestock guys would be all over them.

Then again, maybe not.
Posted by John Phipps at 6:23 AM