How old is baseball?  Wouldja believe over 700 years? 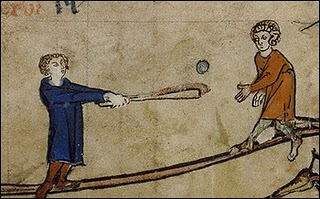 The image in question is found in the margins of the calendar that was originally part of the Ghistelles Hours, a 14th-century Flemish book of hours probably made for John III, Lord of Ghistelles and Inglemunster or his wife. Since John died in 1315 and the calendar begins its cycle of years on Sunday, it's usually dated to either 1301 or 1307. (If the name of the manuscript sounds vaguely familiar, it's because the Ghistelle Hours was broken into pieces and sold as individual leaves and quires, so fragments of it are perennially on sale at Sotheby's and Christies and the like.**)

The calendar pagers were kept together and sold all as one unit and are currently in the possession of the Manuscript Library of the Walters Art Museum, which featured the image recently as part of an exhibit titled "Checkmate! Medieval People at Play".  A few media outlets picked the story up from the exhibit's press release, and it's been bouncing around the web lately with various claims about its origin and subject.***

So, is it the first ever image of baseball?  If you're willing to count proto-proto-proto baseball as baseball, and put an "extant" in front of image,**** well sure. Though there's no base in sight, various historians of sport have identified this game as a version of "stool ball" or "stump ball", which was baseball played with only one base, where the object was for the pitcher to hit a stump or a stool or other handy protrusion with the ball while the batter protected it by batting away the pitcher's balls.  Each player stood on or near what was essentially a "base" If the batter made contact, he was expected to run around the pitcher's base and back to his own.  Various fielders could catch the batted ball and throw the ball at the stool while the batter is occupied running. We have no clue how the scoring might have worked, but apparently the game was co-ed and the sort of thing you'd play at an Easter festival.
[More - including medieval monkeys at bat]

The more I learn about the Middle Ages the more I realize people were much like us.  Only hungrier, colder, sicker, shorter, more ignorant...
Posted by John Phipps at 8:04 AM