Confounding most projections, natural gas seems to be showing up more often and in surprising amounts.  I mean Israel could become an energy exporter, for Pete's sake!

A massive offshore natural gas reserve is poised to give Israel energy security, freeing the desert nation from the threat of boycotts and reshaping the political dynamics of the Middle East.
Estimated to contain 16 trillion cubic feet of gas – equivalent to more than a quarter of Canada’s proven reserves and enough to meet Israel’s domestic demand for 100 years – the Leviathan field is believed to be the largest such deepwater gas discovery in a decade.
...
Observers say the windfall, whose size was confirmed this week, could also affect Israel’s relationships not only with its traditional enemies but also with its allies – and free the energy-poor country in an oil-rich region from the often prohibitively high prices of heat.
But the country’s ability to exploit the field will be fraught with difficulties: It must contend with the challenge of drilling far beneath the earth in deep waters as well as with building infrastructure to transport the gas and sorting out clashes with energy companies over its royalty regime. The field is not expected to start producing for at least six years.
The Leviathan find is believed to cover roughly 325 square kilometres off the country’s north coast – an area about twice the size of the city of Vancouver or half the size of Toronto – in an area called the Levant basin that has already yielded smaller fields. The lease is operated by Houston-based Noble Energy, plus Israeli companies Ratio Oil Exploration and Delek Drilling, which said they plan to drill two more exploratory wells in the coming months to confirm the findings.
If exploited, the gas will mean Israel won’t have to buy on the open market any more and could also lessen its dependence on subsidies from the U.S. government, which has sought to use its clout to push its ally to curb settlements in the West Bank and to try to reach a peace agreement with the Palestinians. [More]

While I will pass over the idea that this discovery could increase their drift toward fundamentalist bellicosity  - which is disconcerting enough, it reinforces my recent suspicion that NG seems to be the BTU of the moment.

Coupled with our own new finds in the US I wonder if we have built our last coal-fired plant for a [long] while.  The easiest replacement is for electricity generation, retiring first oil, then coal factilties. 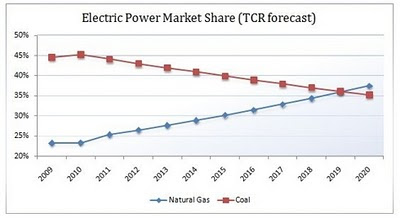 Coal has already been losing market share over the last fifteen years. In that period, the amount of electricity generated using natural gas has nearly doubled, while the amount using coal (and nuclear) has remained the same. The other beneficiary has been renewable energy, but rapid growth in that segment only began in the last few years, during the relatively high natural gas price environment. We anticipate that concerns over increased regulation, including potential carbon caps, will accelerate the coal to gas transition. Planned generating capacity additions are dominated by natural gas, with many utilities vocal in their intentions to use more natural gas-fired power plants to generate electricity going forward. [More, also graph source]

Let's assume this happens, and it lowers the demand growth for oil. This is not good news for ethanol, IMHO. If we buy into ravening appetites for corn keeping prices trending upward (and I think we've all sipped that intoxicating beverage) the reluctance of the oil industry to roll over in the face of new mandates seems unlikely. And the reaction of consumers could also be more vigorous than we think. 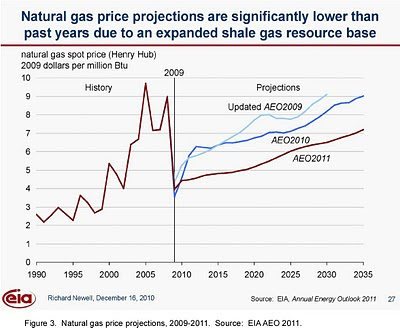 Many aren't buying it, however.


It is understandable that the EIA, as a branch of government, must produce an annual report that is politically expedient and that supports a view that meets public policy expectations. The EIA approach takes a long-term economic view and is, therefore, not concerned with the fluctuations that characterize the real world of petroleum supply, demand and price. At the same time, it is not useful that this report is in conflict with industry best practices and opinion as well as trend data available to the public.
The EIA’s resource estimate of technically recoverable gas from shale is interesting but not relevant to future price or production volume forecasts. The Potential Gas Committee’s 2009 report is the benchmark of credibility, and we hope that the full EIA report in March will explain why we should accept unwarranted and insupportable upward revisions to PGC resource estimates and how these might translate to energy reserves and price. The EIA treats shale gas just like conventional gas in its forecasting and does not acknowledge the much higher decline rates and, therefore, great number of wells required to maintain supply.
Exploration and production companies involved in shale gas production have presented a position that emphasizes production and reserve growth over earnings or profit. It is confusing that the EIA has assumed that market forces and improving efficiencies will save the day for oil and gas prices. It would be more appropriate to frame the problem in the context of reasonable expectations that would be useful to public understanding of the shale gas phenomenon and its potential contribution to natural gas volumes and price. It is unsettling that the EIA has not acknowledged the belief by the U.S. military and other credible sources of an impending liquid fuel shortage that confronts the United States and the world (e.g. Hirsch, Benzdek and Wendling, 2010; JOE Report) . Instead, the EIA has provided an unrealistic view of future oil and gas supply and price that will inevitably not serve public understanding or promote reasonable planning for resource availability or price.

I take this critique with a grain of NaCl, since the author is among peak-oil enthusiasts who were gob-smacked by the recession-aided plummet in demand, and subsequent revisions of energy outlook to "slightly less apocalyptic". Nor do I believe the EIA to be as sensitive to politics as other observers.

So I'm watching for more NG finds in improbable places, increased agitation by the coal industry against GHG regulation, and the sales of the Volt, et al. Ethanol may have less of a supply hole to fill that we imagine.
Posted by John Phipps at 8:08 AM