Cast your mind back to the days of yore when Enron was swindling the state of California for natural gas supplies. Remember the panic about this vanishing resource?


In 2009, the US used some 22 trillion cubic feet of NG (Tcf), moving ahead of Russia to again become the world’s largest producer and consumer. In that year the greatest production came from five Southern and Western states.
...
One of the most powerful drivers in the growth of demand for natural gas has been as a result of its increased use in generating electricity. This is particularly evident as it takes market share from coal-fired power stations due to concerns over the emission of greenhouse gases.


Nationwide, coal-fired electric power generation declined 11.6 percent from 2008 to 2009, bringing coal's share of the electricity power output to 44.5 percent, the lowest level since 1978. Coal consumption at U.S. power plants paralleled the decline in generation, dropping 10.3 percent from 2008.
In sharp contrast, natural gas-fired generation increased 4.3 percent in 2009, despite the 4.1-percent decline in overall electric generation. The natural gas share of generation increased to 23.3 percent—,the highest level since 1970. Electricity's share of the total U.S. natural gas consumption has also risen rapidly, growing from 17 percent in 1996 to over 30 percent in 2009

There is a greater capacity for gas-generated power than these numbers reflect, since the utilities still tend to use coal over NG for longer-term operation as the costs are lower. [More]

To get this new bonanza of energy to consumers we can expect a whole lotta pipeline building. 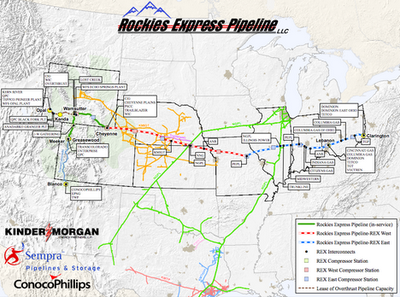 In fact, we had one go through our farm just last year (they are still fixing the drainage in neighbors' fields) and the talk is another could follow, because it's easier to crowd into a ROW already established than negotiate a new route. [See also I-69]

At the same time, efforts to upgrade our grid are making some regulatory progress.


Solar and wind industry leaders are hailing interstate transmission line regulations adopted Friday by the Federal Energy Regulatory Commission (FERC) as a move that could boost renewable developments across the rural parts of the U.S.

The move by FERC on Friday paves the way for new planning and cost requirements that are expected to ultimately lower the price of transmission, especially to metropolitan areas where most of the power in consumed. Organizations like the American Wind Energy Association (AWEA) and the Solar Energy Industries Association (SEIA) say the move will help update an aging grid and will allow proposed developments in remote regions to push forward.
Many projects have struggled to gain financing because of questions surrounding who will pay for transmission projects. The new rules state those receiving the power will share in the costs, rather than being paid for only by those building the power development. The vote also creates a more regional planning and regulatory approach to the future of interstate transmission based on individual state policy.
According to the North American Electric Reliability Corporation (NERC), whose stated mission is to ensure the reliability of the North American bulk power system, approximately 60 percent of all new resources added to the grid by 2019 will come from wind and solar. [More]

The issue was the same as the nuclear waste hangup. Allowing states individual veto power on projects instantly made them harder to play with. States where lines (waste) would simply cross became extortionists, freezing projects on the drawing board.

I can understand the anger at the size of our federal government, I suppose. But in a complex and increasingly parochial political world, One Ring is often the only way to solve many of our problems as a nation.