No wonder the real world...

Is such a shock to graduates. They have no grasp of effort-reward, thanks to grade inflation. 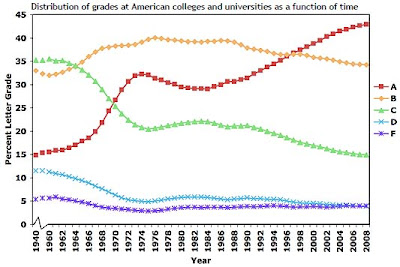 The authors don’t attribute steep grade inflation to higher-quality or harder-working students. In fact, one recent study found that students spend significantly less time studying today than they did in the past.
Rather, the researchers argue that grade inflation began picking in the 1960s and 1970s probably because professors were reluctant to give students D’s and F’s. After all, poor grades could land young men in Vietnam.
They then attribute the rapid rise in grade inflation in the last couple of decades to a more “consumer-based approach” to education, which they say “has created both external and internal incentives for the faculty to grade more generously.” More generous grading can produce better instructor reviews, for example, and can help students be more competitive candidates for graduate schools and the job market. [More]

This would also help sales of those honor-student bumper stickers, I would imagine.
Posted by John Phipps at 6:56 AM