I'd say ethanol was over as a major political factor.

In the past, ethanol was a hot topic in the Iowa caucuses, but in 2011, most of the GOP field came out against ethanol subsidies and greater numbers of Iowans seem to agree with them as larger, more pressing issues such as the economy and the budget take over.
“It’s an issue I think Iowans are mindful of, but with the economy and everything else like that, there are other issues that they’re more focused on,” said Craig Robinson, formerly political director for the state Republican Party and editor of The Iowa Republican.
The industry insists that its political sway is as important as ever.
“I would argue it’s bigger. That is, I mean, y’all don’t write as many stories about it, but in terms of impact on Iowans’ votes it’s probably bigger than it’s ever been because of the size of the industry,” said Monte Shaw, executive director of the Iowa Renewable Fuels Association.
“When you look at what’s driven Iowa’s economy over the last few years, it’s agriculture,” Shaw added. “And the No. 1 driver behind agriculture is renewable fuels, in Iowa.” [More] 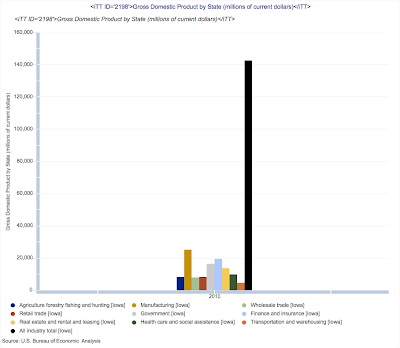 
We just refuse to accept the reality of our place in the economy, don't we?

Sure, especially with JD in DSM. But that is counted as manufacturing not ag, in the same way we are not counted as part of the food processing or retail grocery industry numbers.

The GSP refers to value added by each industry, not flow-through-dollars. The multiplier for an ag dollar is essentially the same as any other $, so it evens out.

Our gross receipts are usually around 3x our contribution to GSP. But those same numbers for construction, manufacturing, etc. are about the same, since the gross profits fall somewhere in the 30% range on average.

BEA works very hard to measure each industry with the same yardstick and they get to make the rules.