Crap in the Farm Bill: Exhibit A...

Of course to my mind, it is pretty much all crap, but there are some real stinkers in the likely outcome from conference committee.


Fearful of anything that even looks like Dodd-Frank, House Republicans want to block a modest federal rule giving farmers and ranchers a greater say on salary increases for senior officers in the banks and co-ops that make up the Farm Credit System.
The rule itself is quite limited and was adopted last October on a bipartisan basis by the three-member board of the Farm Credit Administration, which oversees the nearly century-old FCS network of government sponsored lending institutions.

As shareholders in those associations, farmers and ranchers would be guaranteed a “say-on-pay” vote if compensation for the top corporate officers jumped by 15 percent or more in a single year. But that vote would be non-binding and only advisory.
Nonetheless, the rule has been met by strong opposition from the well-connected Farm Credit Council, the Washington-based trade organization representing the lenders in the farm credit network. And it echoes enough of the 2010 Dodd-Frank financial reforms that Rep. Robert Aderholt (R-Ala.) has drawn a sharp line in his draft 2014 budget for the Agriculture Department and related agencies like FCA.
The $19.5 billion measure, which quickly cleared Aderholt’s Appropriations agriculture panel Wednesday morning, specifically denies funding for the FCA to implement the “say-on-pay” rule. Thus far, most debate has focused on controversial cuts from food aid proposed by the same bill. But the FCA issue is sure to draw more attention when the full Appropriations Committee takes up the measure, likely next week.

The say-on-pay measure was prompted by stunning salaries being awarded to CEO's in the FCS as it rides the ag boom wave. The bipartisan Farm Credit Administration board thought a mere advisory referendum would be a gentle indicator that captive boards needed some restraint, and they heard plenty from FCS employees.  And after all, isn't that what Farm Credit is becoming all about now?

From the Farm Credit Bank of Texas 2012 Annual Report: 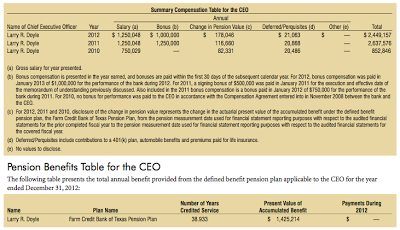 Partly I blame/credit the demise of earmarks for the inclusion of such blatant special interest give-aways. That's how tidbits like this used to be handled.

But Farm Credit competes with my local bank with a huge advantage. They are a GSE - Government Sponsored Enterprise. They have the implied backing of the US when they sell their bonds and, as we found out in the 80's, the almost guaranteed assurance of a bailout when they screw up. Perhaps given those circumstances, they would be foolish not to take advantage in the era of "me first". Still, to go to the barricades to prevent an advisory referendum?

Just spare me the pious sermons about service to agriculture and humanity, etc. FCS is proving no different than any other player in in our increasingly parasitical financial industry.

But as I lift up more of these hidden rentier schemes, keep in mind this is the farm bill (some) farmers are demanding. They'll deserve the consequences, as well.
Posted by John Phipps at 6:52 AM

Maybe you remember Rose (now Rose-Hulman) differently than I...but most of us were from middle income families (except Moe Belknap). I grew up in a well-respected Louisville family and personally knew the President of the major Louisville bank in 1966, Henry Offutt...a family friend.

He made the same money as my dad, who had a small printing and publishing firm.

Today's American financial industries (and a number of corporation officers)are a moral disaster.

I saw a CNN report this morning that states a recent poll showing Congress' approval rating at 10%.