What not to expect...

As the world gets bored with the "Great Stagnation", I think many of us simply assume a more robust economic period is due. After all, we've slogged along for what seems like 127 years with mediocre growth and high unemployment.

But what if that is the best we can look forward to?


Of course, just as it was inappropriate to extrapolate from the previous decade of strong growth, one should not read too much into short-term fluctuations. Nevertheless, there are strong reasons to believe that rapid growth will prove the exception rather than the rule in the decades ahead.

To see why, we need to understand how “growth miracles” are made. Except for a handful of small countries that benefited from natural-resource bonanzas, all of the successful economies of the last six decades owe their growth to rapid industrialization. If there is one thing that everyone agrees on about the East Asian recipe, it is that Japan, South Korea, Singapore, Taiwan, and of course China all were exceptionally good at moving their labor from the countryside (or informal activities) to organized manufacturing. Earlier cases of successful economic catch-up, such as the US or Germany, were no different.
Manufacturing enables rapid catch-up because it is relatively easy to copy and implement foreign production technologies, even in poor countries that suffer from multiple disadvantages. Remarkably, my research shows that manufacturing industries tend to close the gap with the technology frontier at the rate of about 3% per year regardless of policies, institutions, or geography. Consequently, countries that are able to transform farmers into factory workers reap a huge growth bonus.
To be sure, some modern service activities are capable of productivity convergence as well. But most high-productivity services require a wide array of skills and institutional capabilities that developing economies accumulate only gradually. A poor country can easily compete with Sweden in a wide range of manufactures; but it takes many decades, if not centuries, to catch up with Sweden’s institutions. [More]

This is my concern as well. The advance of technology is ending the path of progress for nations with even ultra-cheap labor. The result is fewer South Koreas, more Nigerias.

The best guess is that the idea of economic catch-up has changed, which means that politics in developing nations could change, too. Just as inequality in income and wealth has been rising in the United States, newly growing nations find themselves in a more stratified world, without developing their own strong egalitarian histories to undergird political institutions or economic expectations. Many of the wealthy may produce their public goods — like secure streets and clean, beautiful parks — in gated communities.
In some countries, there may be a de facto “rule by consent” from abroad — if, for instance, you are an African working in a Chinese-owned mine and living in a company town, while receiving your vaccines from a Western nonprofit organization. Those phenomena might not fit our current notions of national pride very well — and might mean further splits within developing nations.
Indeed, the future path of developing countries could be much different from that of recent, high-growth success stories. The next set of emerging-market winners, for example, may retain very large pockets of poverty. And as the expectation of a single, common path for economic development fades, governments may need to rethink what they can accomplish — and how.
In any case, we should be prepared for the possibility that, while Seoul now looks a fair amount like Los Angeles, perhaps La Paz, Accra and Dhaka will never look much like Seoul. [More]

It is informed opinions such as these that lead me to think world GDP growth will not see the heights it did in the Aughts again for a long time. 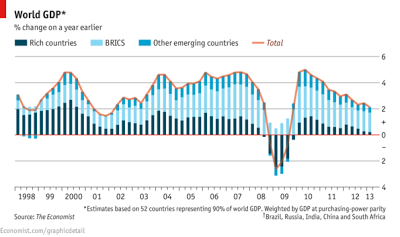 FOUR years after the worst of the financial crisis and the world appears to be faltering again. According to The Economist's calculations, world GDP grew by just 2.1% during the first quarter of 2013 compared with a year earlier. Just 12 months ago, output was growing at a reasonable clip of 3.1%. The European Union, the world's second-largest economy, which welcomes its 28th member on July 1st, is back in recession.

So the question before us is: What if this is as good as it gets? What if we only gain by taking someone else's share of the pie?

In other words, what if it's all like farming?
Posted by John Phipps at 5:52 PM