Your intuition was right...

If, like me, you are convinced rural America is depopulating, you have some hard evidence to verify your perceptions.


It is not clear that the population decline is permanent, the USDA said. Nevertheless, much of rural America – 15 per cent of the US population spread across 72 per cent of its land area – faces population decline.
John Cromartie, a geographer with the USDA’s Resource and Rural Economics Division, said that the exodus of younger rural residents had left many rural areas with a population that is “ageing in place”.
Losing people in their 20s and 30s, the prime childbearing years, meant many rural regions were seeing their birth rates decline significantly. Those people who did move to rural areas tended to be older adults past their childbearing years.
Mr Cromartie said that although further analysis of the latest data was required, earlier studies suggested that rural America was ageing more quickly than the rest of the nation. A 2009 analysis of data for the first half of the decade showed, for example, that those aged 65 and over accounted for 15 per cent of the rural population but 12 per cent of population nationally. [More]

The analysis this is based on is here. Another note is the boom in farm income didn't solve the problem. It made farmers wealthier, but didn't save small towns, rural economies, or stem the loss. 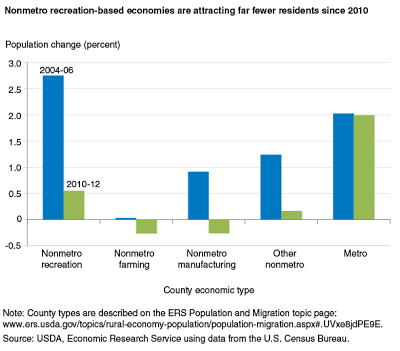 It may seem harsh, but outside the significant problem of providing decent schools within workable distance, depopulation of ag country solves some problems such as nuisance lawsuits, traffic congestion, land division for homes, etc., and conflicting community goals. When only farmers live in a county, there should be fewer collective headaches, it seems to me.

But as I said, where will my grandchildren go to school?
Posted by John Phipps at 6:54 AM

Maybe a MOOC, downsized for homeschooling?