Word of the Day: Sheepwrecked...

Sheepwrecked: ruined by overgrazing sheep. It's hard to imagine sheep as a threat in the UK (What about all those wonderful James Herriot tales?). But the evidence is pretty clear.


Sheep have reduced most of our uplands to bowling greens with contours. Only the merest remnants of life persist. Spend two hours sitting in a bushy suburban garden and you are likely to see more birds and of a greater range of species than in walking five miles across almost any part of the British uplands. The land has been sheepwrecked.
I accept that hill farmers are only trying to survive, and that theirs is a tough, thankless and precarious occupation. I’m not calling for the entire tradition of hill-farming to be abandoned (not that there’s much left of it in this age of quad bikes, consolidation and absentee ranchers). I am calling for a good deal more scepticism about the claims of those who champion it. And for a sweeping reassessment of a subsidy system which has been sold to us with a series of falsehoods.
Do we really believe that keeping the hills bare, wiping out wildlife, helping to flood homes and farms and exacerbating landslips is a good use of public money? [More]

It calls to mind the herder/cowboy conflict of our Western past.

In the case above, it is hard not to side with keeping the English countryside frozen in time. It is incredibly picturesque and charming. 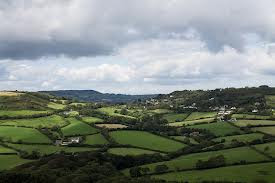 And you can never put it back the same.

But it's not my call, even though I feel more at home in England than anywhere except home.
Posted by John Phipps at 10:46 AM

"And you can never put it back the same."

John, is that how do you rationalize the contribution your industry makes to the continued degradation of soil, groundwater, surface water, and wildlife resources?