I have posted a few times about brain research, almost always based on some new study where people were laying inside an fMRI machine while experimenters poked and prodded their minds with various stimuli.  It all seemed so revelatory and "hard-sciency", especially to an engineer.

But we could be reading too much into these pretty pictures.

Psychologists can be heard grousing that the only way to publish in Science or Nature is with pretty color pictures of the brain. The media, critical funding decisions, precious column inches, tenure posts, science credibility and the popular imagination have all been influenced by fMRI's seductive but deceptive grasp on our attentions. It's a pervasive influence, and it's not because the science is better.

Why does it affect us so? Probably because fMRI seems more like real science than many of the other things that psychologists are up to. It has all the trappings of work with great lab-cred: big, expensive, and potentially dangerous machines, hospitals and medical centers, and a lot of people in white coats. In a recent study, Deena Skolnick, a graduate student at Yale, asked her subjects to judge different explanations of a psychological phenomenon. Some of these explanations were crafted to be awful. And people were good at noticing that they were awful—unless Skolnick inserted a few sentences of neuroscience. These were entirely irrelevant, basically stating that the phenomenon occurred in a certain part of the brain. But they did the trick: For both the novices and the experts (cognitive neuroscientists in the Yale psychology department), the presence of a bit of apparently-hard science turned bad explanations into satisfactory ones.  [More]

Perhaps it's just a by product of having a whole bunch fMRI machines in this country... 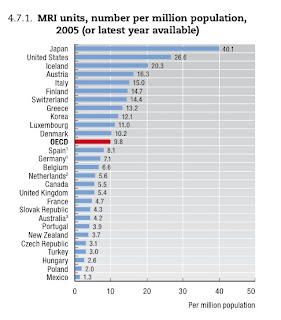 ...(or the fact that House orders an MRI for patients with hangnails) but easy access to these expensive research toys is producing a mountain of results that may or may not be useful.

Last November, the op-ed page of the New York Times, which typically airs political controversies, managed to create one of its own. It published a column describing a study in which 20 undecided voters had their brain activity scanned by functional magnetic resonance imaging (fMRI) while viewing photographs and videos of the major candidates in the upcoming U.S. presidential election. The findings revealed "some voter impressions on which this election may well turn," according to the authors, who included a political scientist, a neuroscientist, and several people affiliated with FKF Applied Research, a company based in Washington, D.C., that sells fMRI-based marketing studies.

The column infuriated some neuroscientists and ignited an animated discussion in the imaging field. "It was really closer to astrology than it was to real science," says Russell Poldrack of the University of California, Los Angeles (UCLA), who drafted a letter to the newspaper that was signed by 16 other cognitive neuroscientists and published 3 days later. "It epitomized everything that a lot of us feel is wrong about where certain parts of the field are going, which is throw someone in a scanner and tell a story about it." [More]

Still there is something fascinating about seeing our minds work - anchoring the weirdness of conscious thought to blood flows and brain regions. But this engagement needs to be tempered with a realization that the experiments still have to be well-designed and causality proven by more than colorful lights on a computer screen.
Posted by John Phipps at 8:31 AM

Well, I guess if they fMRI'd my brain they would find...a fat hamster sitting on a beanbag eating Cheetos watching TV, with an exercise wheel gathering dust and rusting. Until, you, Mr. John post one of your fascinating and thought provoking blogs. Then a dimly lit candle can be seen starting to glow in the distance. Hey, I'll take exercise the easy way anytime!!
By the way did you read the article in the London Times,(July 6) about the Internet coming to an end?? Guess Al Gore is going to have to make more of it, huh??