No occupation is exempt, perhaps...

The increasingly common bimodality of income is not just limited to blue-collar jobs and middle managers, apparently. Consider starting salaries for lawyers, for example. 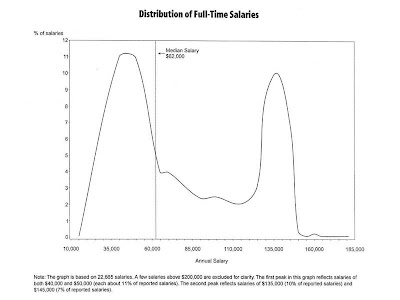 For this profession there are some implications.

* For law firms. The second mode keep moving to the right because too many law firms refuse to reconsider their business model in light of a continuing surge in demand for corporate legal services. All these firms want Harvard, Columbia, Chicago graduates, etc. and, if necessary, Illinois (top 25%), Indiana (top 15%), Marquette (top 10%), etc. If legal education worked like any other market, Northwestern would be merging with Cardozo, exploiting Cardozo's capacity and location and leveraging Northwestern's brand. But law schools are maximizing prestige, not output or profit. Such a merger would be dilutive or break-even at best for the higher ranked school.

There is a lot of commodity corporate legal work on there; why not bow out of the salary wars, ratchet down the hours to 1800, take work on a flat fee arrangement, focus on better/faster service (thus increasing margins on the flat fees), and literally feast on the human capital willing to take a job in the "death valley" range (i.e., ~$80,000 per year), especially if the hours are sane. The client gets quality and cost predictability, and the well-managed firm can make a lot of money. This is a great opportunity for a firm willing to rethink its business model. Larry Ribstein's publicly held law firm would be all over this. But any established large firm willing to think outside the box could do it. [More]

What are the wider consequences of such divergent income distributions? First reactions of a dysfunctional system I think are triggered by our hardwired affinity for fairness. Only a "rigged" system of reward would produce wildly disparate differences in pay like this we reason.

There may be valid causes for such unequal compensation, but as more people are lumped on the left side of income/compensation distribution curves, it is hardly surprising that they perceive our economic apparatus as less than satisfactory. More importantly, if such wide differences between winners and losers are the rational outcome of free enterprise, capitalism needs to recognize political power will not quietly endure this result.

My friends in Denmark were surprised at my possible support for Obama, given my conservative history. After all, they point out, Obama will raise taxes [especially on the successful]. But the one-note economic policy of the right - cut taxes - fails to address the above problem in wealth and income distribution, fostering a climate for wrenching political and social upheaval.

And since nobody in the US can control spending, redistribution by taxation be part of an effort to at least come closer to paying our own bills.
Posted by John Phipps at 5:04 AM

Ugh! John! As somone who has seen government up close from the inside I can assure you that we don't want a bigger government, e.g. healthcare with the efficiency of TSA or even the USDA! A bigger government with wealth redistribution as its priority is a pretty scarey thing... shades of Robert Mugabe!

I too would welcome smaller government, but find zero evidence it would happen with McCain. Given that, and along with many economists I respect, the next least-worst thing is to work to redistribute income (and decrease the deficit), something we already do to decrease growing inequity. Besides we already do it (progressive taxes, etc.) and have done for a century without slipping to confiscatory levels. Every policy is not a tip of an iceberg.

The political right has squandered its credibility on government spending. It's back to simply carping about how bad everyone else is.

We have to deal with reality here.