What if raised awareness is the problem?...

In one of the most discouraging discoveries of my writing career, I ran across this study that seems to demonstrate "educating the public" will only harden attitudes - not aid in the search for compromise.

In his book "Unequal Democracy" author Larry Bartel illuminates the propensity we seem to have for reinforcing positions - not re-examining them. I think this manifests itself in lip-curling charges of "flip-flopping" and our growing cultural divisiveness. 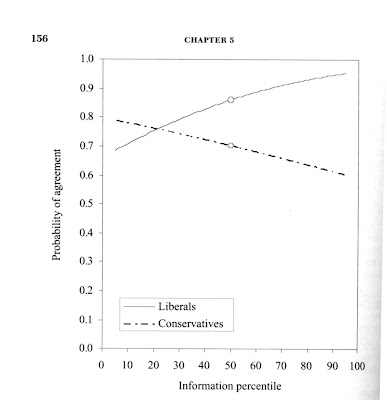 It shows how different levels of political information affect conservatives’ and liberals’ beliefs over whether income inequality between rich people and poor people has increased. The facts are unambiguous - economic inequality between rich and poor has increased very substantially. Yet, as Bartels describes it, increased political awareness (as measured by correct answers to the usual kinds of questions about which party had more members in the House, which party was more conservative etc) has different effects on conservatives and liberals. In Bartels’ words (p.155):

Now consider how ardently we engage in public relations campaigns and respond to information broadcast in opposition. Those most informed will work hardest to filter information that could challenge their beliefs.

This graph dovetails with recent research that suggests we make decisions first in our emotional (old) brain and instantly justify them with our logical (new) brain. While a crude oversimplification, it would seem we have long way to go to rational living.

I think the finding also could be taken as suggesting the more informed one is the more skeptical we are of the existence of impartial information. Any contradicting evidence is obviously slanted, and shrugged off. Meanwhile, we duplicate the same techniques for supporting evidence. One need not look farther than the food-fuel debate for an example.

I am sure I engage in this behavior. In fact, one of the surprising results of writing so much of my thinking down where it can be searched accurately - rather than misremembered - is the brutal confrontation of my own changed mind, and how traitorus that initially strikes me. I've gotten used to it, but I think we all struggle to overcome our inborn love of unchanging beliefs.
Posted by John Phipps at 6:26 PM

Email ThisBlogThis!Share to TwitterShare to FacebookShare to Pinterest
Labels: psychology