It's been a while since I checked how our massive ethanol push has helped us become more independent from BGO (Bad Guy Oil*).  After all, when all other arguments for ethanol subsidies peter out, this one wraps it in the flag and brings home the subsidy bacon every time.

I last checked on progress toward replacing filthy foreign oil with wholesome ethanol in December 2007 so now we are pumping lots of ethanol we should see some serious replacement: 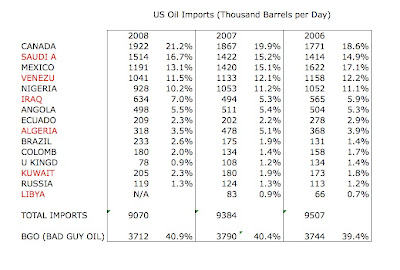 *Bad Guy Oil is oil from SA, Algeria, Kuwait, Lybia, Iraq, Venezuela.  The definition is mine and arbitrary.  Lybia dropped out of the Top 15 last year. Arguably, we could throw Columbia in that category.

Some notes:
Ethanol does not replace Mideast oil.  It replaces high-cost oil from anywhere else - even domestic.
Posted by John Phipps at 12:52 PM

John Phipps: As the Brits would say, you are spot on. I wish more in the agricultural world were as refreshingly honest and insghtful as you.