Ferris wheels are hot.  In fact, we seem to be in some kind of prestige war for the largest right now.


There’s an international battle going on. The prize is height, width, rotation. Its weapons are not guns, nor tanks, nor arrows. The weapons of this battle are wheels. Ferris wheels.
This year, Germany will unveil the Great Berlin Wheel. Upon its completion, the wheel will be 606 feet high — as high as two football fields are long, as high as three Niagara Falls. It will be taller than what’s currently the tallest Ferris wheel in the world, the Singapore Flyer, a soon-to-be-disappointing 541 feet high. This year, China also plans to unveil the Beijing Great Wheel. At an awesome 682 feet high, it will be taller than both the Great Berlin Wheel and the Singapore Flyer (which only debuted as the world’s tallest Ferris wheel last year).

China has, in fact, built wheels in six cities since the start of the new millennium. The Great Dubai Wheel, at 607 feet, is set to enthrall visitors to Dubailand some time in 2009. There’s the Great Orlando Wheel in Florida (400 feet), and Australia’s four-story-high Southern Star, which just opened last month. There are whispers that a Great Wheel might hit Mumbai, though no one can say when. Or how tall.
In August of 2008, Iraq officials unveiled plans for the Baghdad Eye. Its inspiration — the 440-foot London Eye, built in 1999 — was the instigator of all this recent wheel-mania. At a proposed 650 feet, the Baghdad wheel would soar above the London Eye and most of its competitors, giving locals and visitors alike a spectacular view of the city. [More]

Never liked 'em, myself.  I had a buddy in grade school who thought the height of hilarity was to rock the seat as we went around.  My experience not withstanding, I have been on the London Eye and the one at Navy Pier.  Other than a great view of the city, I seemed to miss the point others become enraptured with. 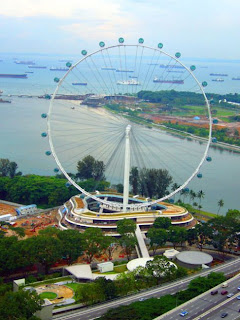 [More photos of the Singapore Flyer]


And I don't find them particularly aesthetic either.  Somehow they seem so.. Industrial-Revolutionary. Maybe if we had a more futuristic design, like the one planned for Dubai. 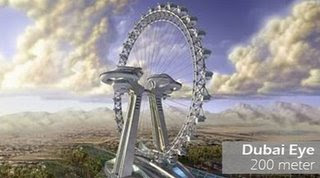 But the way things are going there, it may not get many visitors.

Is it me, or is the world tilting to the left right now?...