I knew something had changed...

When PF Editor Chip Flory announced he wasn't that excited about the Cubs last year.  Little did I suspect what an ominous omen that was. (I'm blaming the economic crisis entirely on him.). 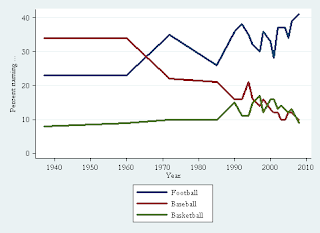 What comes through clearly in these time lines is, first, the rise in the popularity of football and, second, the even more rapid decline in the popularity of baseball.
My own feeling is that this — at least the first trend I just noted — is too bad. Football these days strikes me as an excellent way for 350-pound brutes who start huffing and puffing after playing for three straight downs to wreck their knees and shorten their lifespans. Moreover, I think George Will got it exactly right when he proclaimed football a perfect reflection of how we now organize our society: three seconds of action followed by a thirty-second committee meeting.

I was a happy camper in the olden days, when there were eight teams per league, the teams had pretty much the same players season after season, the games — even the World Series games — were mostly played during the day, and football and basketball just weren’t important. Now the players, instead of being drunks, are druggies, the games last so long and end so late that they’re virtually unwatchable, there are so many teams that I can’t even name them all, and the players move around so much that there’s no real sense of continuity anyway. I don’t really care much about baseball any more, and the Gallup Poll figures indicate that I’m not alone. [More]

Count me in there too.  Unless I'm mistaken, bloated payrolls aren't going to renew the love affair either.  In fact, high salaries anywhere are now targets of disdain, I think.