Maybe the lack of horseshoes...

Prompted the invention of cornhole.

Ms. Hoffmann, a slender 33-year-old claims adjuster, is among this city's top players of a rapidly growing pastime. The game, best known as cornhole but also called Bags or Baggo, has become a craze in recent years at bars, tailgate parties and church picnics in the Midwest. It's particularly popular in Cincinnati, where folks say it originated more than 50 years ago as a backyard diversion, and has more recently grown popular in Chicago, Indianapolis and Milwaukee.
In the game, typically played two-on-two, players score three points each time they toss a 1-pound bag -- traditionally filled with corn kernels -- into a round hole cut into a slanted board about 30 feet away. A shot that misses the hole but stays on the board scores one point. Foes can knock each other's bags off the board to negate a point. The first team to reach 21 wins.
The game is drawing rival leagues, equipment vendors, and big sponsors. The four-year-old American Cornhole Association boasts about 20,000 members, who aren't required to pay dues. Chipotle Mexican Grill Inc., the Chicago Tribune and Visa are among the sponsors of the first Windy City Cornhole Classic on July 28 at Soldier Field, home of pro football's Chicago Bears. Beer companies often sponsor local leagues.

The maker of Golden Tee, one of the most popular coin-operated videogames of all time, recently launched a game called Bags. The company says it already has sold 3,200 of the bar-friendly games, so many that it can't fill new orders until August. A team of independent filmmakers recently completed filming "Cornhole: the Movie," a mock documentary reminiscent of the film "Dodgeball." [More] 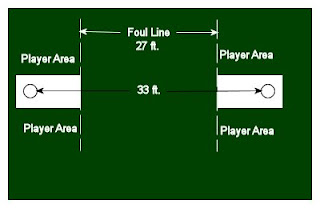 Of course, I rarely frequent drinking establishments, so had not heard of this ummm...craze.  Perhaps some of my gentle readers are devotees of the sport?

And yes, I too am uncomfortable with the name.
Posted by John Phipps at 11:10 AM

This game has been the thing in campground for years. My grand parents played this 20 years ago when they camped in their RV. Drive into any RV park and watch the old folks play away. Nice to see the young people catching up.

John
This game has been played in Iowa for years and is called Bean Bag Toss. Same rules as your game and is usually played in warm weather with a good supply of adult beverages .

Geez, John, you need to get off the farm more. This has been around for quite some time (at least in my region of Ohio).

I think we needed an alternative once they stopped making the lawn darts game (who here remembers Jarts, those bar-darts-on-steroids we used to play in the yard?)

We played it when I was a Cub Scout in Texas in the 60's. Sort of a PC version of horseshoes. But we used corncobs. and the board had 2 holes, one smaller than the other.
Ahhh...lawn darts....nuff said...