More than you want to know... 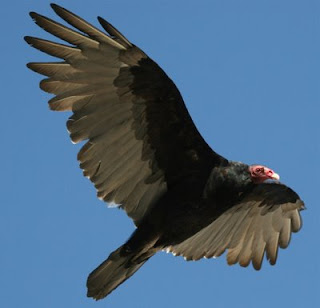 Some visitors even stone the poor vultures, according to a zoo curator. Unjust though this is, it's understandable that we find the carrion-eating birds gruesome. Most of us would rather not think of ourselves as meat, and the details of vulture dining are hard to get comfortable with. Vultures, whose name comes from vellere, Latin for to tear, begin their eating at vulnerable spots on the carcass—the anus and eyes.

As they ride the wind, vultures seek dead things, not dying things, using a sense of smell far more highly developed than any other bird's. They can detect a dead mouse under leaves from 200 feet up. They are discriminating, preferring corpses between two and four days dead. (The turkey vulture entry in the definitive Birds of North America Online does note, "Takes live prey occasionally in unnatural situations.")
Another misconception, and one that has caused farmers to shoot them, is that turkey vultures spread disease. In fact the opposite is true. Something in the vulture gut allows them to digest and destroy the agents of diseases such as cholera and anthrax. If another carrion-eater—rat or coyote or hyena or dog—disposed of the infected carcass, contamination would be spread.
To those who prefer not to have vultures pooping on their building ledges or roofs or decks, Lynch says, "Their waste is as clean as any waste can be." But there is some threat to human beings from the other end of the vulture digestive system. If adults are threatened when nesting, they throw up on the intruder or play dead. (The latter seems a poor strategic choice, given their companions.)
[More - and you'll be too grossed out to stop reading]

I sometimes think we may be "unnaturally selecting" wildlife for their adaptability to human encroachment. For example, deer that can avoid cars or live in suburbs.  In the same way, maybe we are selecting from faster take-off vultures with our bountiful roadkill.

Email ThisBlogThis!Share to TwitterShare to FacebookShare to Pinterest
Labels: nature