Maybe subsidies are the problem...


But the sobering corollary to talking about the public costs of bad diet is that we don't really know how to change the way people eat. Diansheng Dong and Biing Hwan-Lin recently conducted a study for the USDA's economic research service modeling the likely impact of a 10 percent discount on fruits and vegetables for low-income Americans (defined here as incomes below 130 percent of the poverty line). They concluded that the policy, which would cost $580 million, would increase the consumption of fruits by 2.1-to-5.2 percent and vegetables by 2.1-to-4.9 percent. It's not nothing, but it's not much. The graph below shows the effects of the policy, the effects of the policy doubled (20 percent off fruits and vegetables), and in the final column, how far even the double-subsidy world is from the USDA's recommended consumption of fruits and vegetables (which is probably still too low!) [More] 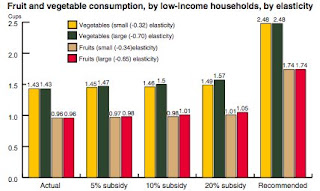 Oddly, subsidizing flavor-dense foods does seem to work. Farm policy has probably made meat and HFCS easier to afford than otherwise.  (OK - jump on me for criticizing our meat consumption, but I have witnessed cattlemen ordering chicken entrees after their doctor and a defibrillator revised their thinking of how much is enough.)


Last but by no means least, I don’t think it makes a ton of sense to talk about subsidizing fruits and vegetables without talking first about un-subsidizing corn, soy and the corn ‘n soy derivatives that artificially drive down the price of Fritos and Big Macs. The policy argument for subsidizing healthy eating is convincing enough to me, but obviously is going to fly in the face of widely held anti-paternalist sensibilities. The case against subsidizing unhealthy eating, by contrast, is totally unimpeachable. [More]

As long as we make policy decisions based solely on immediate economic returns while conveniently ignoring the choices we are making to meet our own personal health goals (like living past 55), we cripple the ability of free markets to guide consumers to better outcomes.
Posted by John Phipps at 1:05 PM

What on earth makes you think the free market cares about any particular outcome for consumers. How much change in the price of a 10oz bag of Fritos that costs $4 would there be if corn were $3bu.(3.4 cents per 10oz) or $6(6.8 cents per 10oz. As for HFCS , if the free market existed imports would drive the price of sugar to very low levels.
RJR (another 60 year old farmer)

I wouldn't say "care", but the market, I believe, best arbitrates between the goals of buyers and sellers.