Those wacky guys at the IRS released some jaw-dropping data about the richest 400 taxpayers in the US. Several economists were all over it. 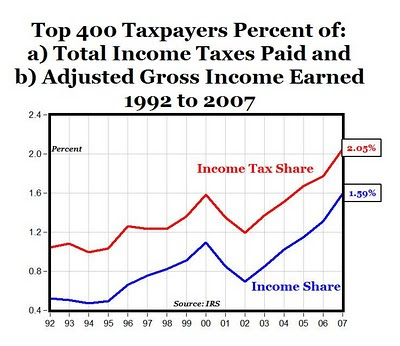 Here are the figures cited in Donmoyer's report (based on Tax Analysts' data analysis presented by David Cay Johnston on Tax.com):

The numbers are what they are, the conclusions are what observers draw. I am less concerned despite my alleged [Groucho] Marxist leanings about the causes than the effects. Even if we stipulate these happy few earned and deserve this significant slice of our economy, I would suggest it represents serious challenges to our economy and political system.


But what about the oft-heard argument that cutting taxes stimulates growth -- that putting money back in the hands of the wealthy in fact raises everyone's economic boat because the wealthy create demand for goods, and therefore, create more jobs as well?

Well, it's time to examine some of those assumptions.
In particular, as the Center on Budget and Policy Priorities reported, the top 1 percent of households held a larger share of income in 2007 than at any time since 1928. Moreover, just after these households earned those record amounts, the U.S. economy fell into its worst economic downturn since the Great Depression. Real economic growth slowed from 2.1 percent growth in 2007 to just 0.4 percent in 2008 and fell by 2.4 percent, or by $324 billion, in 2009. Meanwhile, unemployment rose by more than 5.5 million to exceed 14 million, or roughly 10 percent of the labor force.
The negative impact of this income inequality may be more pervasive than understood. As neurologist William Bernstein wrote, a growing body of research shows that income inequality imposes high social and medical costs. Income inequality may explain the rise in obesity, low economic growth, and high rates of homicide in America, compared with other countries. Other studies show that wide disparities in income make everyone -- not just the poor -- worse off. For example, Harvard professor of public policy and epidemiology Lisa Berkman found that the wealthiest people in countries with less income disparity live longer than the wealthiest Americans. Other researchers have looked at the impact of player salaries on team performance and found that not only did baseball teams with wider pay dispersion do less well than other teams, but the individuals on those teams also performed relatively poorly.

While correlation certainly is not causation, these figures provide pretty convincing evidence that we all could benefit from taking another look at whether low tax rates and high income inequality are helping or, as seems may be the case, hurting the U.S. economy. [More]

The incomes of the top 400 American households soared to a new record high in dollars and as a share of all income in 2007, while the income tax rates they paid fell to a record low, newly disclosed tax data show.

The figures came at the peak of the last economic cycle and show that widely published reports in major newspapers asserting that the richest Americans are losing relative ground and "becoming poorer" are not supported by the official income data. [More]

If you dig through the actual report, you uncover some other points of interest.

Finally, an effective tax rate of 16.6% does not strike me as an onerous burden for the very, very wealthy. (Mine is about 27%) It seems top marginal rates mean much less than capital gains rates. Which would also imply less Laffer bang for the buck from lowering top marginal rates than we think.


At 16.6 percent, the top 400 earners pay a lower actual individual income tax rate than the rest of the top 1 percent of earners, according to a Congressional Budget Office study of effective tax rates in 2004 and 2005. The top 1 percent at that time -- those who made more than $1.3 million -- paid an average of 19.7 percent of their income in federal income taxes.
The 16.6 percent effective tax rate for the top 1 percent is higher than actual taxes paid by middle-income families, that CBO report showed. The middle 20 percent of earners -- those making between $58,000 and $84,500 -- paid on average 3 percent of their income in income taxes.
When the effect of Social Security payroll taxes are counted, the tax burden on middle-income families increased to 12.5 percent, according to the CBO. Social Security taxes are collected on only the first $106,800 of income. [More]

Between the perceived and actual unfairness of such a system and its perverse effects on tax revenue during downturns, I think we could do better. As more economists ponder a VAT or other consumption tax, this debate could just be beginning.

John - your continued interest in this topic befuddles me...especially your apparent support of leveling the income distribution field of play.

While I do support a consumption tax, I disagree with some of the comments that appear to say none of this wealth "flows through." I'm willing to bet in this economy that there are a few small businesses that are very happy to have "rich" clients that have continued to spend and indulge in some of their lavish lifestyles. As my income has increased, I find myself spending much less time on projects and much more money for other people's time. I don't even mow the grass anymore, unless a momentary pause in our farm business allows for some "tractor time"!

I was a middle-income earner living in the city and paying out my ears in taxes. I got out and into a tax-advantaged situation. Monthly paychecks = no risk and no risk should equal little reward in the way of tax savings. Want to decrease your % of taxes...make more money away from your paycheck!

It's like marketing corn. Some people know how to win the game (...the rules aren't any secret), but the people that lose keep wanting to change the game's rules. Support prices, gov't aid, etc. I say, learn the rules and learn to play like the winners do...you may not be as rich, but you'll make more money and be smarter for the experience.

I have addressed the topic a number of times so just some bullet points in reply.

Why I think growing income inequality is a problem:

Many of these trends are not apparent in the upper quintile, such as your example points out. But I think they will be. Pointing out the poor are better off than they were 50 years ago fails to address the danger of the growing chasm.

Finally, II is bad now, but with the increasing return to capital and lower returns to labor (our farms are prime examples) it's going to accelerate.

The question is if there is any level of II that you would become concerned about?