Tackling the deficit (I)...

Although I support running a deficit during a recession - and I think when the American Enterprise Institute agrees the stimulus effort helped, I'm not alone - I also welcome the opportunity to figure out how to tame this beast. First of all, I think we should get some myths and mistaken beliefs straightened or at least exposed to some light.

To begin with while we all know there is waste in government, there is waste in all financial or business activity. I'm pretty sure many of you could point out significant savings in my farm budget, for example.  Is the federal government really that much worse?

Many people think so.


Here's a fascinating little chart. The question is, "Out of every dollar the federal government collects in taxes, how many cents do you think are wasted?" The average answer, in the latest Washington Post poll, is 53 cents. A few comments: 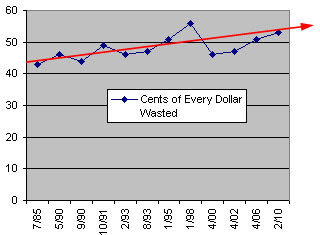 As is pointed out in the comments to the above post, the graph is pretty sloppy (the x-axis is irregular), but the fundamental information is displayed.  However, if true, this perception would mean, we could save a TRILLION dollars simply by getting rid of waste.

This sounds exciting and painless, but remember those "wasted" dollars don't just fall under the car seat, they go into somebody's pocket and enter the economy just like, well, non-wasted dollars. This means wasted dollars have a constituency, such as the $900 hammer manufacturer. Even "wasted" welfare dollars end up in grocery and liquor stores, car repair shops and the like.

The point is not there is no waste, but even if identified the best we could hope for is to re-allocate those dollars and we probably wouldn't see a big economic boost as a result. In fact, if you couple reducing waste with an income tax cut to be budget neutral, you might actually move them to the investment class from the spending class. Bottom line is reducing waste is a great idea, but no sure economy lifter.

Another tricky bit is identifying waste.  One thing I have noticed is virtually all "waste hawks" target farm subsidies. For example, from The Heritage Foundation's Top 50:

Over half of all farm subsidies go to commercial farms, which report average household incomes of $200,000.[12]
A Department of Agriculture report concedes that much of the $2.5 billion in "stimulus" funding for broadband Internet will be wasted.[28]
Suburban families are receiving large farm subsidies for the grass in their backyards--subsidies that many of these families never requested and do not want.[36]
The Conservation Reserve program pays farmers $2 billion annually not to farm their land.[49]

Trying to systematize waste might help, but even there it can be in the eye of the beholder.


The possibilities for what makes government "wasteful" are many, but it seems to me waste can be reduced to three non-exclusive types:


1. Ineffective spending: Spending on programs that do not work;

2. Inefficient spending: Excessive spending or overhead/overpayment on programs that do work; and/or

3. Inappropriate spending: Efficient and effective spending on programs that the respondents normatively view as something the government shouldn't be involved with in the first place.

So, as an example of Type 1 waste, some citizens undoubtedly view certain welfare spending as ineffective because it doesn't eradicate poverty, while others view certain types of defense spending as ineffective because we have weapon systems to defend against threats more imagined than real. As a Type 2 example, even citizens who support welfare or defense spending probably think that red tape, high salaries and pensions and other federal employee benefits, complex billing protocols, duplication of effort, outright fraud (by government officials and/or programmatic beneficiaries) and other bureaucratic problems as inefficient overhead. Type 3 waste might be something that the government does effectively and efficiently, but citizens believe they shouldn't be doing, like subsidizing corporate marketing abroad in the eyes of liberals, or providing services to illegal immigrants for conservatives. Of course, a citizen who believes the government should not be involved in some policy area and thinks what the government spends on that policy isn't doing any good anyway and believes the feds are spending that money inefficiently, might view federal spending as wasteful on all three counts. [More]

Certainly, decreasing waste and inefficiency is a worthwhile goal, but my contention is it is grossly overblown as a way to reduce the deficit.  In fact, the hands-off nature of defense spending when it comes to budget cuts insures some of the most wasteful spending will continue.

Attack the waste, but then let's get serious about the reducing deficit. And for farmers, keep in mind that constantly focusing on waste and fraud only makes our favorite "waste" more of a target.

Having worked in government (USDA in fact) I've seen tremendous waste, some deliberate, some simply because of poorly worded legislation and some due to bureaucratic inefficiency. In my tiny slice of government the waste was in scores, if not hundreds, of millions of dollars annually, so extrapolating it across government the number is surely well into hundreds of billions.

The best we could hope for by eliminating waste is NOT to simply re-allocate those dollars, but rather leave them in the hands of the people who actually created the wealth and earned it by their own endeavors.

It is not so much about reducing the deficit, as it is not taking what folks have earned (or burdening our grandkids with debt) for wasteful endeavors. That is simply unethical and repugnant. We lack accountability in government on a grand scale.