Solar power is sneaking up...

On feasibility.  One example: 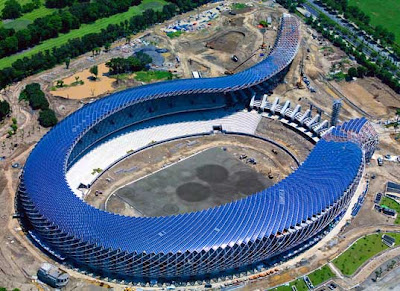 Here's an idea for a power plant: the solar-powered sports coliseum. What if you skinned an entire stadium with solar such that it could satisfy its own ginormous appetite for power when filled with spectators, but when idle (which is usually often) its solar panels could still be at work, making and feeding electricity to the grid? Sports facility as power plant. A colossal idea not likely to be done anytime soon; a rich fantasy beyond the pale.
Except that it has been done, in Taiwan. Recently completed to host the 2009 Goodwill Games, the stadium will be able to supply all the juice for its 3,300 lights and two jumbotrons, or local residents when the lights and screens are off. [More]

Solar costs seemed to be heading in the right direction, unlike nuclear power.  There is still the Holy Grail of alternatives to fossil fuels to be found however: a really, really, good battery.
Posted by John Phipps at 3:11 PM