Our position in the economy is peculiar in many ways. As small businessmen, with few or no employees, the nature of the job loss of this recession has been disguised. I'm going to talk about that this week on USFR. But more ideas and analyses are coming out that offer to me at least a possibility of a new world of employment.

First some atypical employment data.  For instance, this graph. 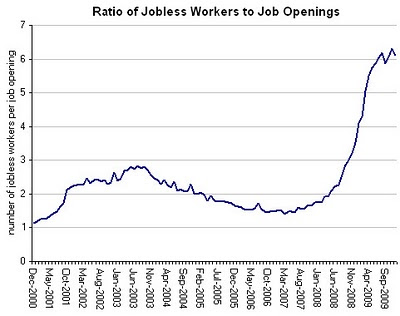 This one strikes home for me, because recently at a speech, a farmer came up to me and we had the following conversation:


"You were in the Naval Nuclear Power Officer Candidate program, I take it?"
"Yeah - I was a NUPOC, but remember, the subs were wooden back then."
"My grandson just signed up - he's a mechanical engineer."
"Great - I hope he finds it every bit the adventure and leadership training experience I did."
"Thanks for saying that. I hope he does too. But the problem was he couldn't find a job."

The idea of a shortage of entry-level engineer jobs is chilling. I always thought bullet-proof employability was the compensation for being a nerd.  But along with teachers, MBA's and practically all other professions, the difficult truth about this job environment is sinking in after enough time to move us past "temporary".


In past recessions, the most educated carried the lowest unemployment rate. But this economic downturn has been anything but typical. College graduates who have been in the work force for several years are being laid off. Those just leaving school apply for dozens of jobs and receive few, if any, responses.
"Unemployment rates for college graduates are higher than they are in normal (downturns)," Orazem said. "But while the unemployment rate has risen for people with college degrees, they are still much lower than people with a high school degree. They have really gotten nailed in this recession."
According to the U.S. Bureau of Labor Statistics, unemployment rates for college graduates with a bachelor's degree who are 24 years old or younger are close to 9 percent this year. Typically, that group has a 2 percent to 3 percent rate, Orazem said.

In general, the industries hit the hardest by the recession in Iowa include accounting, finance, marketing, manufacturing and mechanical engineering and durable goods manufacturing, Orazem said. [More]

The real nature of this downturn in employment is a combination of both economics and technology, I believe. But not since the Great Depression have we had an employment situation that may well shape a whole generation, as this forecast prolonged job-recession seems to portend. My fear is the most wrenching of these dislocations will be felt by men, and carry over to families and social structure.


The weight of this recession has fallen most heavily upon men, who’ve suffered roughly three-quarters of the 8 million job losses since the beginning of 2008. Male-dominated industries (construction, finance, manufacturing) have been particularly hard-hit, while sectors that disproportionately employ women (education, health care) have held up relatively well. In November, 19.4 percent of all men in their prime working years, 25 to 54, did not have jobs, the highest figure since the Bureau of Labor Statistics began tracking the statistic in 1948. At the time of this writing, it looks possible that within the next few months, for the first time in U.S. history, women will hold a majority of the country’s jobs.
In this respect, the recession has merely intensified a long-standing trend. Broadly speaking, the service sector, which employs relatively more women, is growing, while manufacturing, which employs relatively more men, is shrinking. The net result is that men have been contributing a smaller and smaller share of family income.
“Traditional” marriages, in which men engage in paid work and women in homemaking, have long been in eclipse. Particularly in blue-collar families, where many husbands and wives work staggered shifts, men routinely handle a lot of the child care today. Still, the ease with which gender bends in modern marriages should not be overestimated. When men stop doing paid work—and even when they work less than their wives—marital conflict usually follows.
Last March, the National Domestic Violence Hotline received almost half again as many calls as it had one year earlier; as was the case in the Depression, unemployed men are vastly more likely to beat their wives or children. More common than violence, though, is a sort of passive-aggressiveness. In Identity Economics, the economists George Akerloff and Rachel Kranton find that among married couples, men who aren’t working at all, despite their free time, do only 37 percent of the housework, on average. And some men, apparently in an effort to guard their masculinity, actually do less housework after becoming unemployed.
Many working women struggle with the idea of partners who aren’t breadwinners. “We’ve got this image of Archie Bunker sitting at home, grumbling and acting out,” says Kathryn Edin, a professor of public policy at Harvard, and an expert on family life. “And that does happen. But you also have women in whole communities thinking, ‘This guy’s nothing.’” Edin’s research in low-income communities shows, for instance, that most working women whose partner stayed home to watch the kids—while very happy with the quality of child care their children’s father provided—were dissatisfied with their relationship overall. “These relationships were often filled with conflict,” Edin told me. Even today, she says, men’s identities are far more defined by their work than women’s, and both men and women become extremely uncomfortable when men’s work goes away.
The national divorce rate fell slightly in 2008, and that’s not unusual in a recession: divorce is expensive, and many couples delay it in hard times. But joblessness corrodes marriages, and makes divorce much more likely down the road. According to W. Bradford Wilcox, the director of the National Marriage Project at the University of Virginia, the gender imbalance of the job losses in this recession is particularly noteworthy, and—when combined with the depth and duration of the jobs crisis—poses “a profound challenge to marriage,” especially in lower-income communities. It may sound harsh, but in general, he says, “if men can’t make a contribution financially, they don’t have much to offer.” Two-thirds of all divorces are legally initiated by women. Wilcox believes that over the next few years, we may see a long wave of divorces, washing no small number of discarded and dispirited men back into single adulthood. [More of a superb exploration of the jobless recovery]

Already we are seeing a change in the cultural stages of adulthood. I use a standard laugh-line in my presentations: "Adolescence lasts until 30 now". Only fewer are laughing and more are grimacing.

Especially for fathers of daughters, the hope of their child independence is fading. (It's not much better for young men, in all fairness.) Not only are jobs hard to come by - let alone jobs that pay the rent - the odds for matrimony (for women) even at college are plummeting, thanks to overwhelming female/male ratios in higher education today.


North Carolina, with a student body that is nearly 60 percent female, is just one of many large universities that at times feel eerily like women’s colleges. Women have represented about 57 percent of enrollments at American colleges since at least 2000, according to a recent report by the American Council on Education. Researchers there cite several reasons: women tend to have higher grades; men tend to drop out in disproportionate numbers; and female enrollment skews higher among older students, low-income students, and black and Hispanic students.
In terms of academic advancement, this is hardly the worst news for women — hoist a mug for female achievement. And certainly, women are primarily in college not because they are looking for men, but because they want to earn a degree.
But surrounded by so many other successful women, they often find it harder than expected to find a date on a Friday night.
“My parents think there is something wrong with me because I don’t have a boyfriend, and I don’t hang out with a lot of guys,” said Ms. Andrew, who had a large circle of male friends in high school.

Jayne Dallas, a senior studying advertising who was seated across the table, grumbled that the population of male undergraduates was even smaller when you looked at it as a dating pool. “Out of that 40 percent, there are maybe 20 percent that we would consider, and out of those 20, 10 have girlfriends, so all the girls are fighting over that other 10 percent,” she said. [More about college life that makes me weep to read, having gone to an all-male engineering school in the paleolithic era]

Just anecdotally, this seems to ring true for many of my friends with daughters. Now in their 30's, these attractive, accomplished young women can't find men of even modest caliber. Add in the recession effects on male careers, and the result is not hopeful.

But as I said in the distant beginning, on the farm we often miss these cultural upheavals, since there are no "unemployed farmers". They just disappear. And while many of us are beginning to experience some survivor guilt, it is only through our children, grandchildren and friends that the full trauma of this economic storm becomes real.
Posted by John Phipps at 6:46 PM