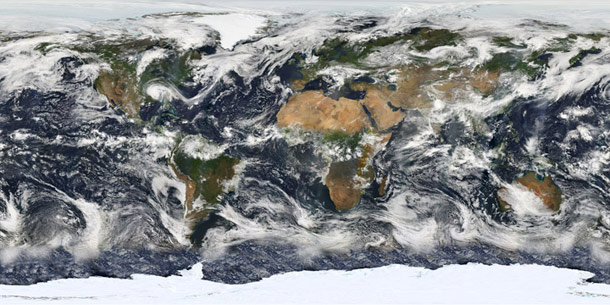 
No, not Terra the Earth, Terra the satellite. NASA’s Earth-observing bird first opened its eyes on February 24, 2000, and for the past decade has been dutifully watching our planet. It has looked upon us at different wavelengths, different resolutions, at different times of day, and different times of year. It has tracked changes, and reported back what it has seen. [More]

Sad note: due to funding cuts my local PBS station is dropping its weather department.


The elimination of the weather department signals an end to independent weather forecasting for WILL Radio and WILL-TV. Staff will share weather information with listeners from reports from the National Weather Service.

Providing the weather to the public costs about $140,000 a year, $40,000 of which is underwritten by businesses, according to Illinois Public Media.

“We are proud of our long tradition of weather coverage. Ed Kieser, Mike Sola, and their staff have for years dedicated themselves to making sure our listeners knew when severe weather threatened as well as bringing them day-to-day forecasts. But now that in-depth weather information is available on the Web and elsewhere, we believe that our limited resources must be applied to other areas,” said Illinois Public Media General Manager Mark Leonard in a statement Thursday. [More]

I wonder if media "weatherpersons" (?) are finally going to join the recession for the reason mentioned above. If the product is essentially free on the Internet...


THESE HAVE BEEN hard times for news organizations, and TV news is no exception. Fewer people are watching: viewership of local TV news fell by an average of 4.5 percent last year. Revenue is down, and with the precipitous drop in auto ads, once the staple of local TV news, it’s unlikely things will get better soon. Experienced and expensive anchors are being dropped for younger, cheaper ones. Reporters and producers are on the chopping block. But in the midst of all the cost-cutting, it seems the television weatherman isn’t going anywhere.

Weather is key to developing a strong brand for local newscasts, and it’s relatively cheap to produce. Beyond salaries, the only real expenses are any private weather forecasting or graphics services used in addition to National Weather Service data, which is free. Top meteorologists may find their salaries getting cut just like the anchors who stick around, but due to their low cost and high value, they’re unlikely to be sent packing. Karpowicz says that in a news department of 60 people, the total weather budget including salaries and expenses accounts for less than one-fifth of the total news budget. “We are in difficult times,” says Karpowicz, “but we are not considering cutting back on weather.”[More]

Maybe I'm seeing ponies that are only clouds, but it feels like the recession is starting to impact more people in my personal world recently.  It's like they've held on so far, but have exhausted their resources or luck.
It could also be that this is a reflection of tightening government budgets across the board. We often forget how important government is to rural economies.
Posted by John Phipps at 7:36 AM

We haven't watched a local or national news program in our house in 3 years. Mostly because we don't watch TV at all. With Netflix and the internet and mp3 players, who needs TV?