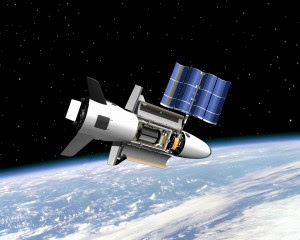 The Air Force launched a secretive space plane into orbit last night from Cape Canaveral, Florida. And they’re not sure when it’s returning to Earth.
Perched atop an Atlas V rocket, the Air Force’s unmanned and reusable X-37B made its first flight after a decade in development shrouded in mystery; most of the mission goals remain unknown to the public.
The Air Force has fended off statements calling the X-37B a space weapon, or a space-based drone to be used for spying or delivering weapons from orbit. In a conference call with reporters, deputy undersecretary for the Air Force for space programs Gary Payton,  space programs did acknowledge much of the current mission is classified. But perhaps the most intriguing answer came when he was asked by a reporter wanting to cover the landing as to when the X-37B would be making its way back to the planet.
“In all honesty, we don’t know when it’s coming back for sure,” Payton said.
Payton went on to say that the timing depends on how the experiments and testing progress during the flight. Though he declined to elaborate on the details. The vague answer did little to quell questions about the ultimate purpose of the X-37B test program. [More]

In addition to being unmanned, the project is being run by a private contractor, another possible harbinger for the space program.


A post on an official Air Force blog described the X-37B as "a flexible space test platform to conduct various experiments to allow satellite sensors, subsystems, components and associated technology to be efficiently transported to and from the space environment."
Some observers have theorized that the X-37B is meant to be an orbital platform for lasers or other weapons that could be used to knock out satellites belonging to hostile countries.
Whatever its purpose, the X-37B's successful launch by a consortium of private contractors could provide a boost for President Obama's plan to outsource some space missions and launches to the private sector.
The plan has drawn heat from some lawmakers, who claim it will cost jobs in states that support NASA launches and that launches are best left to the space agency's experts.
ULA officials, for their part, said Thursday's launch of the X-37B shows the efficiency of public-private partnerships. [More]

Given the budget issues looming before us, this transfer of mission to the private sector is the right way to go in my book. It's also pretty un-socialist, no?

Email ThisBlogThis!Share to TwitterShare to FacebookShare to Pinterest
Labels: space