I notice they don't mention in-laws...

As we focus on Boomers retiring and succession issues, this rather surprising finding could shed some light on some of the awkward family dynamics that cloud economic and business problems for family businesses. 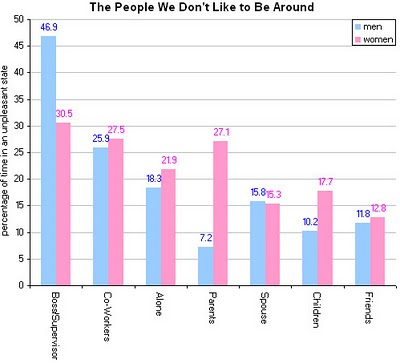 The bar chart shows the percent of time people are in an unpleasant state when they are around different types of companions.
It’s probably no surprise that people find spending time with their bosses — authority figures who keep them in line — to be most unpleasant. Almost a third of the time that women spend around their bosses feels unpleasant; for men, nearly half of the time spent around supervisors is unpleasant. It’s also probably no surprise that hanging out with friends — the people we choose to spend time with — is least unpleasant.
For most of the categories, men and women report being in an unpleasant state about the same portion of the time. But the biggest divergences relate to spending time with family, and not in the way that stereotypes of feminine domestic bliss might predict: Women appear much less happy when spending time with their children and parents than men do.
This can be partly explained by the different types of activities the two genders are likely to be doing around their families.
For example, when women are spending time with their children, they are more likely to be doing chores and handling child care, which can both be relatively stressful activities. When men spend time with their children, on the other hand, they spend relatively more time watching television and traveling — more leisurely activities.
The biggest gap relates to how men and women feel when spending time with their parents. When men are around their parents, they are in an unpleasant state about 7 percent of the time. Women find being around their parents to be unpleasant 27 percent of the time.
Again, some of this can be explained by what men versus women are likely to be doing when they’re with their parents. As Nancy Folbre has written here before, women are more likely to be tasked with caring for their elderly or disabled parents than their male counterparts are.
But even if you control for these different types of activities — that is, even when both genders are engaging in the exact same labors or pastimes with their kin — there are still “sizable differences in the U-index between men and women when they are in the company of their parents or children,” the study’s authors write. [More]

One thing I have come to appreciate is how difficult it is to establish a working relationship with in-laws going both directions in generations. The stereotypical "daughter-in-law" stories from farm family advice columns could be missing the point. It may not be just the husband's parents, but parents in general that some women struggle to get along with.

Another reason women remain a mystery to me.
Posted by John Phipps at 4:31 PM