By now all right-thinking citizens are horrified by our deficit projections - and rightfully so.  Since raising taxes to pay for stuff is unthinkable, let's stop spending on stuff.

In fact, this is our historical answer.


In a reassuring sign, Goldman Sachs said in a note released Tuesday that U.S. governments have had a strong track record of stabilizing the debt by tightening fiscal policy. Taking a sample span from 1962 to 2008, the bank's economists said that debt has historically been brought back under control mainly via spending cuts, while taxes haven't been raised significantly. [More]

In this order, apparently: 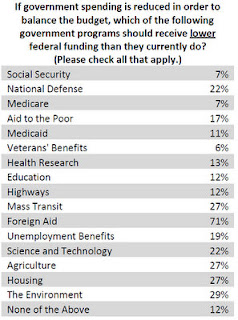 I've already dealt with the only popular one - foreign aid - and good luck cutting aid to Israel, BTW.

So farmers need to note what else is even faintly unpopular enough to become a target.  While we have always depended on our considerable Congressional clout, I wonder if this is reasonable in coming months.  The fervor for budget cuts instead of tax increases will be intense from the right, with which more farmers align generally.

It may be possible to retain ag spending at similar levels, but folks, doesn't it seem a stretch to be pressing legislators with Christmas list of projects right now?  Or at least to do it while complaining about the deficit?

Perhaps the theory is to grab what you can when you can and let idealist wusses come up with cuts to their own programs.  Regardless, this level of cynicism would do little to help with our ongoing PR efforts to undercut possible regulation, I suspect.

But I hope our ag leadership has a retreat plan somewhere.  It could prove useful.
Posted by John Phipps at 6:34 AM