Recent viewership numbers for CNN could hardly be worse.


Six years later, CNN is still the network Americans turn to when an earthquake strikes Haiti or a crucial health care vote takes place. But most days are slow news days, opinionated journalism is more interesting than the elusive quest for perfect objectivity and CNN is getting absolutely murdered in the ratings.
It was bad before this year; now it’s terrible. CNN’s prime-time hosts have lost almost half their viewers in the last 12 months. In February, the once-proud network slipped behind not only Fox News and MSNBC, but HLN (its sister network) and CNBC as well. Anderson Cooper sometimes gets beaten by re-runs of Keith Olbermann’s “Countdown.”[More]
We all can put our finger on the problem, but as convinced as we are, we still don't agree very much.
The sneaky opinion — Anderson Cooper’s sneering contempt for conservative protesters — is what people don’t like. Cooper and company try to be stealth but they come of as snide and fake, as if they are trying to hide who they really are. [More]

Ah yes, the condescension problem.  But there are other takes.


The rise in ideological broadcast news coupled with the declines witnessed in the newspaper industry poses a larger question for journalism in America. CNN's exposure reflects a growing disinterest in straight news reporting.
"What do they stand for?" MSNBC's CEO Phil Griffin told AP. "That's their biggest challenge. CNN ain't what it used to be, and that has given us an opening because we stand for something and they don't." But are news sources supposed to stand for anything? [More]

Despite the crowing from Fox (hmm - bad metaphor, I guess), I'm not sure this signifies some big rightward shift in American tastes.  We'll have elections to validate that claim.  And the larger problem is TV news viewership as a whole. Ditto (heh) with radio.


More than 70 years ago, back in the 1930s when the United States had only 122 million people, less than 40% of its current 308 million, a priest named Charles Caughlin (a priest long before that designation carried the negative weight of recent revelations) had twice the number of radio listeners Rush Limbaugh has now. Father Caughlin regularly reached some 40 million Americans. That's hardly a contest: Caughlin 33% of the American people, Rush Limbaugh 6%. Check Caughlin out. You'll find his show business style quite different from Limbaugh, but their content and approach to those in political power is strikingly similar. While Caughlin was sure Franklin Roosevelt meant the end of Western Civilization, as we know it, Rush Limbaugh feels the same way about Barack Obama. If Obama is really worried about the effect of right wing entertainers, especially Limbaugh, he might want to remember that FDR was elected President of the United States four times in a row from 1932 to 1944.
Another long ago favorite, Walter Winchell, also had many more listeners 60 years ago than Rush Limbaugh has in 2010. Plus, in his later years Winchell, with his trademark hat, was a TV hit -- quite the opposite of Limbaugh's failed attempt to make it on television. Walter Winchell was also in more than 2000 newspapers, at a time when newspapers were the major source for Americans to get their news and information. In terms of political leaning and ideology, Rush Limbaugh, Charles Caughlin and Walter Winchell are three peas in a pod. The right wing radio entertainers have been warning us of impending socialism for nearly 80 years. So, what separates these men besides the size of their listening audience? The answer is, the attention paid to them by others especially other media. In their day nobody, particularly other media, except those who tuned-in cared one way or the other about Caughlin or Winchell.
This same question applies to all the modern right wing media entertainers -- Beck, O'Reilly, Hannity, and the lesser-known but equally outlandish performers who populate the radio airwaves -- people like Michael Savage, Laura Ingram and Neal Boortz. These are all great entertainers, excellent "air personalities" and performers. But the question is: Why does anyone pay serious attention to anything they say? For that, I have no quick answer. My guess is we are easily bored and just as easily, albeit temporarily, entertained. That doesn't say much for those who invest themselves in entertaining us with what are often factually incorrect or entirely made-up political positions. And, let's face it -- that doesn't say much for us either. [More]

But it was this chart, that also caught my attention, as Aaron listens to NPR all the time. 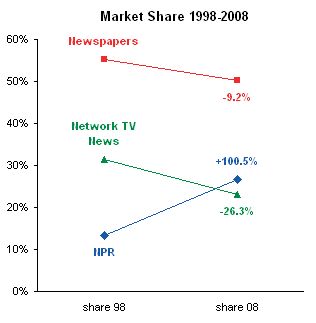 Douthat argues that CNN’s ratings decline can be fixed with “conversations that are lengthy, respectful and often riveting” and that eschew standard red-blue binaries and give “free rein to eccentricity and unpredictability.”
I rarely watch cable news, but that plan sounds plausible enough. Indeed, it actually sounds a lot like NPR, although NPR’s eccentricities are fairly muted, at least relative to Glenn Beck’s (Douthat’s exemplar of eccentricity and unpredictability). Of course, we should distinguish between NPR’s news programming and their entertainment programming. Perhaps the news programming is too stultifying to meet Douthat’s standard. I would describe it as “lengthy” and “respectful.” Certain stories can be “riveting.” But your mileage may vary. [More]

In my usual policy of assembling three anecdotes and calling them "data", I offer these other examples:
So my cage-free guess is fashion controls much of our media habits.  Sooner or later we get tired of the usual fare, and look for something else. There is also a bigger trend, perhaps.

TV can't compete in mobile media well.  First, because of it's two-sensory engagement.  You can't watch TV and drive  - despite the best efforts of some idiots on our roads.  Meanwhile Aaron loads up podcasts before he goes to the field, or tunes into the radio while planting, etc.  Given the stuff he's been passing on to me - and the fact he has programmed all the radios - I may fill some field boredom with NPR, etc. I used to listen to WGN, but the programming there has gotten bizarre recently (possibly due the the Trib bankruptcy, and the desperate need for cash).

Mobile TV also requires larger files, bandwidth and the largest display possible - all turn-offs. While Korea-level Internet could allow watching live TV, you get back to point 1 above.

Finally, I think we could be reaching the tapering-off of our outrage enjoyment. At least, most of us other than the few percent who religiously tune into sources like Fox. We're ready to get people OUT of our faces, and as things like the economy crawl toward a slightly better place, exhausting ourselves with anger could become soooo yesterday.

Oh, yeah - thanks for watching USFR, folks.
Posted by John Phipps at 6:52 AM