The Census of Fatal Occupational Injuries (CFOI) just came out, so you can stop holding your breath.


−    Fatal work injuries in the private construction sector in 2008 declined by 20 percent from the updated 2007 total, twice the all-worker decline of 10 percent.
−    Fatal workplace falls, which had risen to a series high in 2007, also declined by 20 percent in 2008.
−    Workplace suicides were up 28 percent to a series high of 251 cases in 2008, but workplace homicides declined 18 percent in 2008.
−    The number and rate of fatal work injuries among 16 to 17 year-old workers were higher in 2008. −    Fatal occupational injuries involving Hispanic or Latino workers in 2008 were 17 percent lower
than in 2007. Fatalities among non-Hispanic Black or African American workers were down 16
percent.
−    The number of fatal workplace injuries in farming, fishing, and forestry occupations rose 6
percent in 2008 after declining in 2007.
−    Transportation incidents, which accounted for approximately two-fifths of all the workplace
fatalities in 2008, fell 13 percent from the previous series low of 2,351 cases reported in 2007. [More, pdf] [My emphasis]

Before we go blaming the fisherpersons and loggers, consider these graphs: 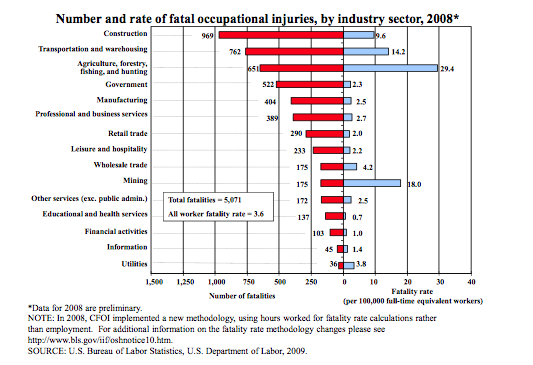 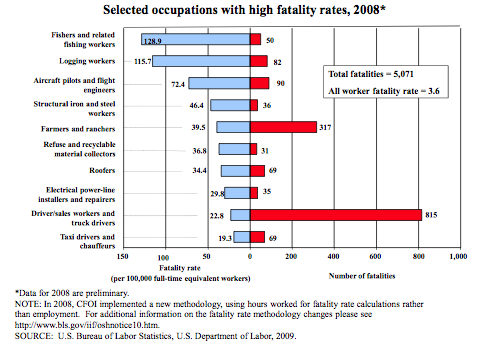 Hardly good news, but something to which we are so accustomed as to be invisible as a problem.  I still think we are gradually moving to a time in our industry when safety and reduced injuries will be so economically advantageous as to be a prime focus for leading competitors.

It may take a legion of lawyers and hard-nosed insurance companies to make this happen, but as the number of family-only operations slides and those with employees (and their concomitant legal exposure) increase, I suspect these numbers will begin to drop rapidly.
Posted by John Phipps at 6:52 AM

Email ThisBlogThis!Share to TwitterShare to FacebookShare to Pinterest
Labels: safety