Upset because you didn't sell the rest of your corn three weeks ago? This is your brain on volatile markets:


Montague, et. al. immediately discovered a strong neural signal that drove many of the investment decisions. The signal was fictive learning. Take, for example, this situation. A player has decided to wager 10 percent of her total portfolio in the market, which is a rather small bet. Then, she watches as the market rises dramatically in value. At this point, the investor experiences a surge of regret, which is a side-effect of fictive learning. (We are thinking about how much richer we would be if only we’d invested more in the market.) This negative feeling is preceded by a swell of activity in the ventral caudate, a small area in the center of the cortex. Instead of enjoying our earnings, we are fixated on the profits we missed, which leads us to do something different the next time around. As a result investors in the experiment naturally adapted their investments to the ebb and flow of the market. When markets were booming, as in the Nasdaq bubble of the late 1990s, people perpetually increased their investments. In fact, many of Montague’s subjects eventually put all of their money into the rising market. They had become convinced that the bubble wasn’t a bubble. This boom would be different.
And then, just like that, the bubble burst. The Dow sinks, the Nasdaq collapses, the Nikkei implodes. At this point investors race to dump any assets that are declining in value, as their brain realizes that it made some very expensive mistakes. Our investing decisions are still being driven by regret, but now that feeling is telling us to sell. That’s when we get a financial panic.
In the last year, Montague has expanded on these provocative results. He’s shown, for instance, that heavy smokers are less vulnerable to fictive learning. This is probably because they’ve learned, over time, to ignore those regretful thoughts telling them to quit smoking. (Although they lament their nicotine addiction — they know it’s killing them — they keep on lighting up.) The upshot is that their ability to not learn from fictional scenarios might also make them more resistant to the allure of bubbles. The lesson, I guess, is that it might be good to have a stock broker with a debilitating addiction.
Montague has also begun exploring the power of social comparison, or what he calls the “country club effect,” on the formation of financial bubbles. “This is what happens when you’re sitting around with your friends at the country club, and they’re all talking about how much money they’re making in the market,” Montague told me. “That casual conversation is going to change the way you think about investing.” In a series of ongoing experiments, Montague has studied what happens when people compete against each other in an investment game. While the subjects are making decisions about the stock market, Montague monitors their brain activity in two different fMRI machines. The first thing Montague discovered is that making more money than someone else is extremely pleasurable. When subjects “win” the investment game, Montague observes a large increase in activity in the striatum, a brain area typically associated with the processing of pleasurable rewards. (Montague refers to this as “cocaine brain,” as the striatum is also associated with the euphoric high of illicit drugs.) Unfortunately, this same urge to outperform others can also lead people to take reckless risks.
More recently, a team of Italian neuroscientists led by Nicola Canessa and Matteo Motterlini have shown that regret is also contagious, so that “observing the regretful outcomes of another’s choices reactivates the regret network.” (In other words, we internalize the errors of others. Or, as Motterlini wrote in an e-mail, “We simply live their emotions like these were our own.”) Furthermore, this empathy impacts our own decisions: The “risk-aptitude” of investors is significantly shaped by how well the risky decisions of a stranger turned out. If you bet the farm on some tech IPO and did well, then I might, too.
There are two important takeaways to this research. The first is that neuroscience might soon be able to help make macroeconomic diagnoses, allowing us to better distinguish between booms and bubbles. For instance, one could have subjects “play” the current gold market in a scanner, if only to see how their brain activity compares to that of people playing previous market bubbles.
The second is that speculative bubbles are rooted in a very adaptive learning mechanism, which is probably why they’re so hard to prevent. The only way to keep us from bidding up LinkedIn stock and tulips is to keep us from learning through counterfactuals. Of course, that means we’d be cut off from a crucial means of self-improvement, a way of benefiting from mistakes we didn’t actually make. In other words, the reason we sometimes make such stupid investment decisions is because we’re so damn smart. [More worth reading]

I still don't think our markets are "bubbling", but the more I read about my lyin' brain, the less sure I am about my reasons.

I think the availability bias is also making me think this will be another relatively poor crop, for us and the US, simply because our recent trend is downward as too much water has plagued us consistently since 2007. None of these are sound reasons or bases for prediction.

Speaking of which, I just finished a thoroughly enjoyable, albeit discouraging book: 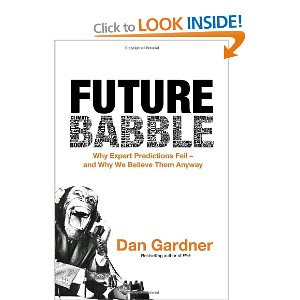 Like Philip Tetlock's monumental work the evidence and logic is very persuasive, but Gardener sheds more light on why and how our brains deal with uncertainty (badly) and how we massage our own thinking to relieve the stress uncertainty brings us.

Passive marketing is looking better and better all the time.
Posted by John Phipps at 5:12 AM