I hate 'em now. Not really, but some guys can't seem to stop catching a break.


The two had already sold slightly more than 300 acres outside Chicago, at an average of $25,000 per acre.

They took those proceeds and bought 4,000 acres, in 17 downstate counties, that they rented to other farmers. That left them 1,800 acres to farm corn and soybeans in Chicago's exurbs, including fewer than 1,000 acres they owned.

That's when fate smiled on them.

During the past year, corn prices have doubled on increased demand for use as livestock feed and biofuels, and soybean prices have risen by more than 50 percent.

As those prices rose, the Baltz brothers began selling their fertile land downstate that they paid $2,500 to $4,000 an acre for and which is valued at as much as $8,000 an acre. During the past 12 months alone they've sold more 2,000 acres. Now they are more active farmers in their own backyards.

During the past three months, they've purchased from lenders almost 1,000 acres of farmland in Will and Kendall counties that were once scheduled for homes, paying a fraction of what developers paid years ago.

"A lot of (banks) just want it off their books," Ed Baltz said. "We got a little more power because we got the cash to spend."

On a recent warm afternoon, the brothers stood behind a weathered, vacant white-frame home and barn north of Black Road in Shorewood, on 246 acres that, at their peak, sold for $65,000 an acre and in 2005 were annexed by the village and zoned for more than 400 single-family detached homes.

The Baltz brothers paid $3.6 million, or about $14,500 an acre, for land that already has subdivision utilities brought to the property line. This year, though, the only thing rising out of the dirt will be the corn that Bob Baltz planted last month. [ More] 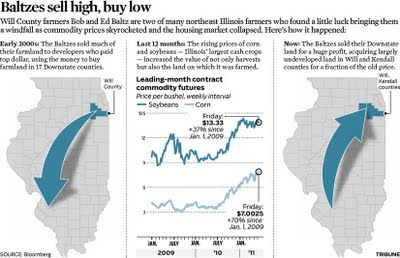 This is the world we live in. And it is germane to recall that Chicago was a mere military outpost when southern IL was booming.

I also use these examples to remind me my decisions about land (like yours) can have disproportionate consequences.
Posted by John Phipps at 4:15 PM

John we have too give these guys credit for achieving a sell high- buy low plan as any farmers I knew that tried a strategy like that ended up out of the land market.In the past year another local farmer has sold all his land except his homestead with (rumor) too buy it or other back cheaper in the future so we will see. Presently 16 or so expansions or new greenhouse ventures are going on. Seems to be endless supply of cash in that industry but you can't help too think it holds similarities too hog model where eventually a squeeze will come. Most corn and beans went in this area from June4-10 and actually look pretty good and received some nice (not floods) showers-rain this week-regards-kevin

This story reminds me of something similar that my boss's father did. He bought a piece of land to cut the timber which turned out better than he thought. He then found out that a low lying area was underlain by gravel which could be scooped up and sold. The gravel pit filled up with water and he sub divided the land and sold lake front building lots.

My take is to remember there's more profit potential in speculation than actual production.