Incredibly cool photos of Phobos passing Jupiter as seen from the Mars Express.

Mars has two moons, Deimos and Phobos. For orientation see this graphic: 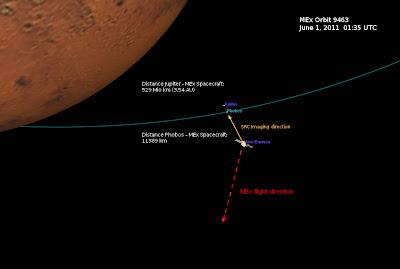 [Click to embiggen]
I remember a science fiction story where Mars explorers discovered an extremely low-orbit moon previously undetected. The leader of the expedition got to name it, and chose "Bottomos"
(snort)
(via bad astronomy)
Posted by John Phipps at 7:15 PM

Email ThisBlogThis!Share to TwitterShare to FacebookShare to Pinterest
Labels: space