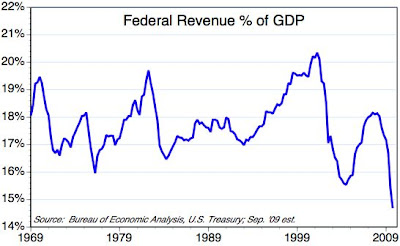 First, I use it measured as a percent of GDP, as do most economists for comparison, since the growth (or shrinkage) of the economy can hide the effect. The same system is used for expenses, BTW, since a bigger economy means more "variable costs/income" for government.

Advertisement
But the benefits mostly accrued to the rich, according to the nonpartisan Tax Policy Center. The think tank reports that between 2001 and 2008, the bottom 80 percent of filers received about 35 percent of the cuts. The top 20 percent received about 65 percent—and the top 1 percent alone claimed 38 percent.
What about the president's claims? Take his pledge that the cuts would spur job growth. To be fair, we'll ignore employment changes during 2008, the year the Great Recession seized the economy. During the 2001 to 2007 business cycle, America's economy enjoyed 52 straight months of job growth. But it was sluggish—in fact, the slowest rate of jobs growth on record since World War II, and just one-fifth the pace of the 1990s.
Then there's wealth. Put simply, the aughts were a decade of income stagnation: The tax cuts failed to bolster most taxpayers' earnings, even before the recession hit. Median real wages actually dropped from 2003 to 2007. Household income from business-cycle peak to business-cycle peak declined for the first time since tracking started in 1967. As documented by my colleague Timothy Noah in his series "The United States of Inequality," this did not hold true for the nation's billionaires and millionaires. Garden-variety high-wage earners saw their income go up. And incomes for the top 1 percent skyrocketed. For some people, obviously, the cuts "generated new wealth," in the president's phrase. But overall, inequality got worse.
That leads to the third metric: Did the cuts "open new opportunities"? It's a vague phrase, but one way to measure it is to look at job growth—and there's nothing to see there. Another way would be to say that the cuts benefited "job creators" (to use the current en vogue phrase), like the nation's start-up businesses. But the number of private-sector jobs created by young companies fell during the Bush administration.
Unfortunately, the tax cuts never translated into robust economic growth, either. Indeed, the aughts saw the worst growth since World War II. From 2001 to 2007, annual GDP growth averaged just 2.4 percent per year, lower than in any other postwar business cycle. The contrast is starker still when judging against the previous decade. In real terms, GDP grew half as much from 2001 to 2010 as from 1991 to 2000.
There is another metric that Bush set out for the tax cuts: Did they succeed in helping to create a smaller government? Again, the answer is no. Events beyond Bush's control necessitated the Afghanistan war. He later decided to invade Iraq, and pushed through unpaid-for domestic expansions of government, like Medicare Part D. Deficits and government spending as a share of GDP grew during the Bush administration.
OK, a final attempt at celebration. Did the tax cuts stimulate the flagging economy in the early aughts? Sort of. Tax cuts give a mild boost to the economy, but not a big one. "After the tax rebates in 2001, 2003, and 2008, households [spent] between 25 and 67 cents more for each dollar of tax cut," William Gale of the Tax Policy Center writes. That makes tax cuts "a relatively weak way to help the economy compared to increases in government purchases, for which each dollar of increased deficit turns into an additional dollar of spending."
So, to recap: The Bush tax cuts were followed by low GDP growth, negative median wage growth, and little job growth. Even before the Great Recession, growth in the Bush business cycle was the weakest since World War II. And the cuts cost about $2.6 trillion between 2001 and 2010, according to the Economic Policy Institute—adding to a debt future generations of taxpayers will pay for, plus interest.[More]


You guys are lucky I have to get in and cool off every now and then.

You do know about Google, right?

Your figures don't lie, but....total revenues did increase but we still have a government that spends more than it takes in. I guess in your world we give all our money to the gov and let them decide who gets it.

More epistemic closure being demonstrated by the commentors of Incoming!!