This budget item always tops the list for what to cut when deficit arguments start between ordinary citizens. It will never happen - at least to a significant degree, and this week just showed why.

First, how much are we talking here?

So, still less than farm bill costs. Next, who gets the money?


Israel is currently the largest cumulative recipient of U.S. foreign aid since World War II. Although aid to Israel began in 1949 with a $100 million bank loan, large-scale U.S. assistance for Israel increased dramatically throughout the several Arab-Israeli wars in the 1960s and 1970s.
A 2012 report by the Congressional Research Service, “U.S. Foreign Aid to Israel,” characterizes the historical financial relationship, types of military spending and current trends.
Among the highlights of the report are:
[More] 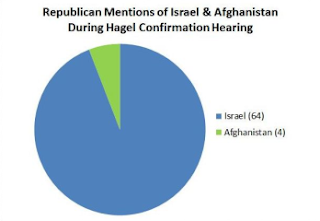 In fairness, Democrats are only mildly less obsessed.  But it seems clear to me what and whom our Senate thinks of first. It's not ending the longest war in our national history in Afghanistan and saving troops.

Any effort to cut foreign aid will be overwhelmed by the Israel lobby. I'm not saying this is right or wrong, but injecting a note of realism for budget hawks.

The second item on most budget cutting lists is ag subsidies, and I don't the Israel gives a hoot about them.